The 24th edition of the Volvo China Open, tri-sanctioned by the China Golf Association, European Tour and the Asian Tour, will offer a total prize money of CNY 20 million (approximately US$3,150,000) when it gets underway at the Topwin Golf and Country Club from April 26-29.

Mr. Zhang Xiaoning, President of China Golf Association, discussed the new developments for 2018 at the official tournament launch press conference, saying: “As China’s longest-running international professional golf tournament, the Volvo China Open is now entering its 24th year and is well-established as one of China’s and the world’s highest-level golf events as well as being a flagship tournament of the China Golf Association.

“We are happy to see this year’s Volvo China Open return for the third successive year to Topwin Golf and Country Club, where Haotong Li won in 2016 and began his incredible journey on the European Tour. This year we will see many top players from the European and Asian Tours and I wish them all good luck and hope that Chinese players will be able to stand out and bring honor to the country,” said Mr. Zhang.

“Special thanks also to Volvo for its long-term contribution to China golf, which played the key role in popularizing the game and improving the level of players in China,” he added.

A star-studded line-up will come together for the 2018 Volvo China Open, including defending champion Alex Levy of France, six-time European Tour winner Joost Luiten from the Netherlands and Austrian Bernd Wiesberger.

With the Asian Tour also co-sanctioning the event, there will be a strong challenge from Asia, including Thailand’s number one Kiradech Aphibarnrat, as well as current Asian Tour Habitat for Humanity Standings leader and European Tour Race to Dubai ranking number one Shubhankar Sharma of India.

They will join the local elites spearheaded by current World Number 38 Haotong Li and 2015 Volvo China Open winner Ashun Wu for a battle to be played out at the Ian Woosnam-designed course, located in the shadow of China’s Great Wall.

“Having the club selected for a third straight year is not only testimony to the quality of the course and the professionalism of the club, it is also yet another boost for Beijing Huairou district and the further development of its tourism economy,” said Mr. Shi Lin, Chairman of Topwin Group.

“Compared with the ‘strong return to Beijing’ in 2016 and ‘revisiting’ in 2017, the ‘third time handshake’ is more significant. In the past two years of the Volvo China Open, top players from around the world have put on a great show for the spectators and TV audiences and enhanced the attention and popularity of the Topwin Club.

“This year, we will benefit from the previous events and again showcase the first-class features and status of Topwin Golf and Country Club, while aiming to provide an even better experience for all players and spectators.”

The 2018 edition of the Volvo China Open will also see the introduction of Mitime Group as the new co-promoter for the event. Mitime Group is wholly owned by Zhejiang Geely Holding Group which is also the owner of Volvo Cars. Mr. Wang Xinggui, Chairman of Mitime Group said: “We are delighted that Mitime Group can be a part of the Volvo China Open and our subsidiary company Mitime Golf become the co-promoter of the longest-running National Golf Open of China. Our thanks go to the China Golf Association and Volvo for their recognition and support. We will strive to further establish the event as a top-class professional tournament brand and in turn promote the development of golf in China.”

“We are delighted to see that under the guidance of the China Golf Association, Chinese players have made amazing progress in international tournaments. Volvo is very happy to be able to create a platform for Chinese players to step onto the world stage and to help further develop China golf.

“The brand philosophy of Volvo fits perfectly with golf’s concept and it is expected, that through the Volvo China Open, Volvo will have a closer connection with the elite class in China.

“In one month’s time, the event will return back to Beijing Huairou Topwin Golf and Country Club for the third time. We appreciate the gracious assistance from Topwin and we believe the players from the European Tour and Asian Tour will put on another great competition for a global audience,” said Mr. Sven De Smet. 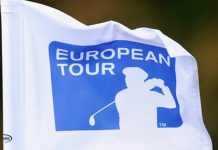 Scottie Scheffler’s hot finish has him in control at Tour Championship...