Rafa Cabrera Bello will return to Spain as he chases his childhood dream of winning the Open de Espana, one of the oldest and most celebrated tournaments in Continental Europe, from April 12-15, 2018.

The World Number 21 confirmed he will make the trip to his homeland for the 91st edition of the event, staged at the Centro Nacional de Golf in Madrid – the home of the Royal Spanish Golf Federation and one of the country’s top public golf courses –

A three-time winner on the European Tour, with his most recent victory coming at the 2017 Aberdeen Standard Investments Scottish Open, Cabrera Bello has enjoyed a phenomenal start to his 2018 season.

The 33 year old has posted three top ten finishes, including tied third at the WGC-Mexico Championship earlier this month, to sit in fourth position in the Race to Dubai Rankings presented by Rolex and was also part of Team Europe’s victory over Team Asia at the EurAsia Cup in January.

“It would mean a lot to win the Spanish Open,” said Cabrera Bello, who is set to make his 15th appearance in his national Open. “In my case, I’m very proud having won as an amateur from seven years old up to 18 in every single category. It’s obviously a dream to win the Spanish Open. It’s the biggest thing that you dream of when you’re a kid and you’re a Spaniard.

“It’s one of the oldest events in European Tour history and we’re very proud that it is the Spanish Open. It has great winners – a lot of them Spaniards as well, who are my idols – and it is definitely one trophy that I would like to add to my CV.”

Cabrera Bello, who went undefeated in his Ryder Cup debut at Hazeltine National in 2016, is looking forward to playing in front of big crowds at Centro Nacional de Golf in Madrid – a venue well serviced by public transport from the heart of Madrid – and is pleased to see the Spanish tournament make its return to the European Tour’s Race to Dubai.

“I’m sure that we’re going to have really big crowds and I’m sure there will be a really big support by Spanish golfers. I’m very excited. For all Spaniards, it’s our fifth Major!

“We missed out on it last year and it’s been hard for the Spanish Federation to keep the event going. I know they’ve put a huge amount of work, together with the European Tour and the Madrid Golf Federation, for the event to be held this year. I know it came out a little late and we had to find a gap in the schedule to sneak it in, but I’m very happy it is back.
“I grew up playing lots of golf representing the Spanish Federation. I’m very proud of all my years playing golf as an amateur for Spain. They do a huge amount for golf all over Spain and I’m helping the young guys now when they’re turning pro. I know they’ve worked really hard over the last couple of years to get this event on track again and the fact that we’re playing in Madrid, the capital of Spain and also on a public course at the home of the Spanish Federation, it’s all really exciting for Spanish golf.

“I personally like the back nine a lot. I know the front could be a little tricky because it’s a little narrow. I think overall it’s a competitive course; it’s going to have a very exciting finish.” 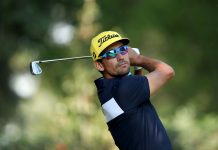 R& A still exploring options for The particular Open at Royal...