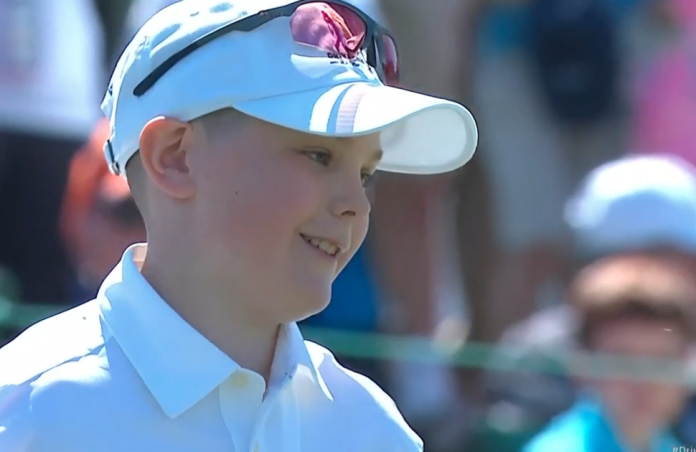 Conrad Chisman made history on the 18th green Sunday at Augusta National Golf Course, home of The Masters.

That’s not a sentence many people get to live, but the Stanwood Middle School sixth-grader sank both of his putts at the national Drive, Chip & Putt finals, which took place Sunday at Augusta, Georgia — something no other contestant has ever done.

First, the 12-year-old calmly sank a left-turning 30-foot uphill putt. He immediately picked up his second ball, shook his head in disbelief and smiled as he walked to where he was to attempt his second putt.

He lined up his second attempt — a 15-foot downhill shot — and dropped it in the center of the cup to become the first to drain both attempts.

“Mark that down as one of the really great moments of the now five-year history of the Drive, Chip & Putt finals,” Golf Channel announcer Peter Jacobsen said during the telecast of Chisman’s two successful putts.

“I thought I did pretty good,” Chisman said in a phone interview Sunday. “I didn’t know that made history until later. It really made me proud of the work I put in and all the people that supported me along the way.”

While he may have looked calm on TV, he said he wasn’t.

“I don’t know what’s more nerve-wracking, all those people watching or being on that green,” Chisman said of the fabled 18th green at Augusta National. “But the combination of the two was deadly. I was really nervous.”

He earned fourth place overall after finishing in the bottom half of the drive contest and chipping events.

Going into the final event — putting — Chisman said he wanted to finish on a good note.

“I was just trying to get that one close,” he said of his first putt. “I had good speed and read the line. … I really try to not overthink things. I really like to try to look over the line and just putt.”

Chisman was one of 80 competitors — 10 per age division — that vied for trophies under perfect weather conditions, surrounded by throngs of spectators and being broadcast live on The Golf Channel. Contestants were scored on a 30-point system: Longest drive is worth 10 points, closest cumulative chips 10 points and nearest cumulative putts 10 points. The highest total composite score will determine the winner. Chisman totaled 18 points, seven behind the winner.

After showing off his swing, Conrad Chisman became the first player to make BOTH putts on the 18th green!Bravo 👏 👏👏 https://t.co/bRntZkyH7D

“While there’s a ton of great tidbits to learn about Conrad, like his favorite band being Guns and Roses or that he likes Dustin Johnson’s ‘swag,’ by far the best part was his swing with the driver, which rivals Bubba Watson and John Daly,” Christopher Powers wrote in the GolfDigest.com article.

Chisman and his fellow competitors were flanked throughout the day by many professional golfers, including Sergio Garcia, Bubba Watson, Jon Rahm, Martin Kaymer, Annika Sorenstam and Gary Player.

“It was an amazing experience” he said. “This was one of the best things ever. Everyone screaming and yelling. Now I understand kind of what the pros feel like on the green. Normally, I watch other people experience that.”

Chisman qualified last year, winning the regional for his age group at the famed Olympic Course near San Francisco. Since that event, Chisman won the Washington Junior Golf Association’s Winter Classic at Chambers Bay, near Tacoma, in December. Recently, he’s been practicing every day at area courses, mainly Camaloch.

He also will have opportunities to mingle with pros and watch them during Monday’s practice round. However, during this weekend’s Masters Championship, Chisman won’t be watching the pros. Instead, he will be about 200 miles south competing in the Jekyll Island Jr. Open as part of the Hurricane Tour, a national youth golf league.

“I want to thank everybody who supported me along the way,” Chisman said. “All the people watching and rooting back home, that means a lot to me.”