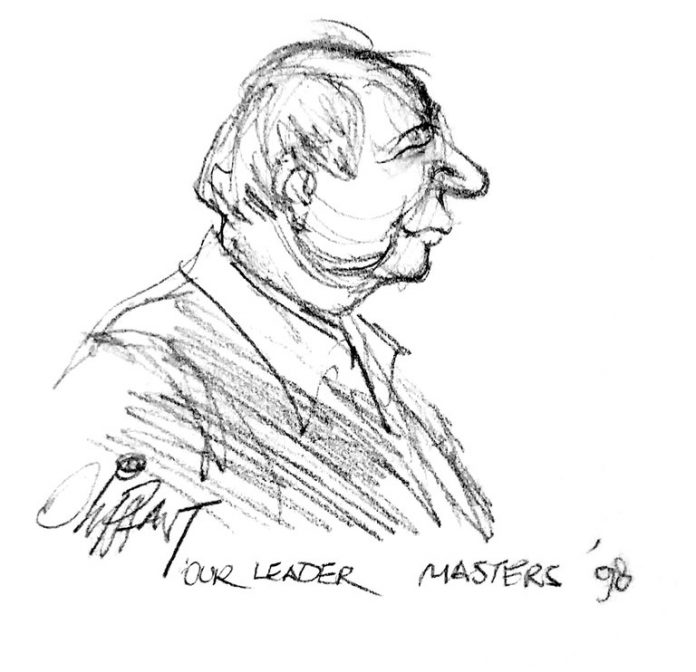 Back when I joined Golf Digest in the late 1970s, our headquarters was in Fairfield County, Connecticut, then the comic-strip capital of the world, which explains why so many cartoonists could be found chipping around our hallways. They’d gather at a local watering hole called Mario’s, across the street from the Westport railroad station, waiting for a courier to pick up their weekly newspaper strips and board the train to King Features in New York. High jinks ensued, and golf often broke out.

Dik Browne once drew his lookalike character, Hägar the Horrible, using a viking horn as a medieval mobile phone in Golf Digest’s “Guide to Slow Play” (March 1988). Stan Drake, who illustrated Blondie, Dagwood and Mr. Dithers in “The Unwritten Rules of Golf Etiquette” (June 1993), also produced the art for many of our instruction articles at the time. I even collaborated in 1995 with the USGA and Charles Schulz on a Peanuts campaign to promote walking on the course.

One memorable day, my predecessor, Jack McDermott, invited 18 cartoonists for an outing at Winged Foot Golf Club to draw their characters playing each hole for the 1984 U.S. Open program. Mort Walker of Beetle Bailey fame, who died earlier this year at 94, was overheard to say: “Whenever I hit a bad shot, I ask myself, Can Jack Nicklaus draw?” Hi and Lois, Prince Valiant, Bringing Up Father, Boner’s Ark, Superman, Joe Palooka, The Wizard of Id, B.C., the Muppets and Popeye spilled across the fairways.

The most famous cartoon strips Golf Digest ever published were the “Lesson Tee” and “Playing Lessons” series by Jack Nicklaus with Jim McQueen’s colorful illustrations in the 1970s and ’80s. In 2004, we tapped Andrew Finlayson to draw Tiger Woods’ tips in manga, which mixes the distinctive style of Japanese comic books and Western cartoons. Such artists added a humanistic perspective to our content that brought humor to the serious act of ball-striking.

These friendships inspired a long tradition at Golf Digest to invite illustrators and cartoonists as house guests during the Masters each April and record their first impressions in the following year’s tournament preview. We’ve been graced by the company of Rowland B. Wilson, Bruce McCall, Mark Ulriksen, Jeffrey Smith, John Cuneo, Tatsuro Kiuchi, Nathan Fox, Istvan Banyai and, last year for this issue, R Kikuo Johnson (see “Days & Nights: Masters Week, Inside And Outside The Gates”).

Kikuo says his lasting image of the Masters was “the beauty of the course,” bringing to mind the allure of golf in Hawaii, where he grew up. What surprised him was “how cheap the food was. I wouldn’t say a pimento-cheese sandwich is worth more than $1.50, but the modest picnic aesthetic was charming in contrast to the grandiose vibe.”

I should add that we also had one Masters mystery: Pat Oliphant, the premier political cartoonist of his generation, joined us 20 years ago this April. After three convivial days of red wine and peach cobbler on the clubhouse porch, Oliphant stealthily disappeared from Augusta. Inexplicably, he left behind only one rough sketch, published here for the first time—it’s an older version of me that has proved to be sort of a reverse Picture of Dorian Gray. I’ve now aged into this harrowing portrait! 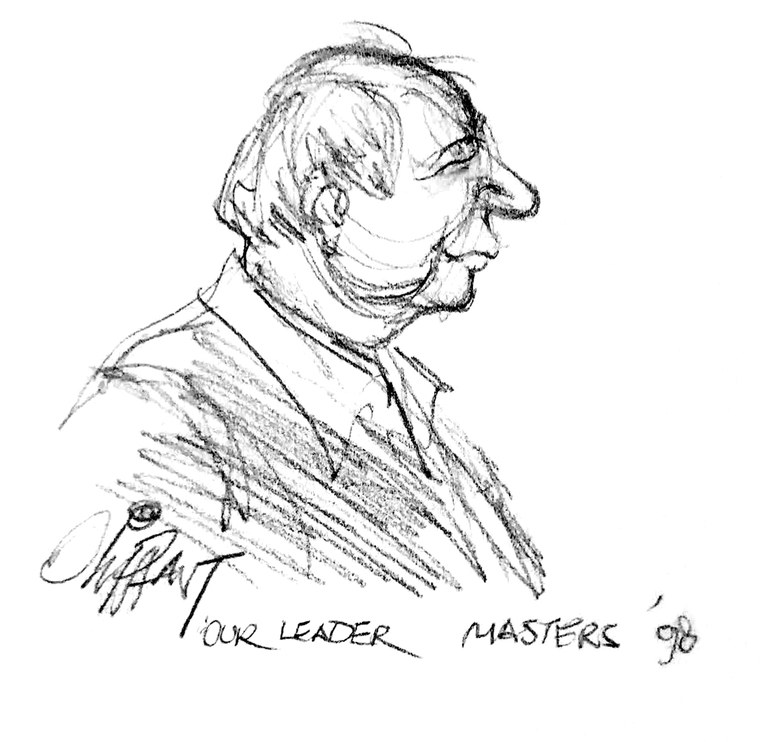 MORE: Days & Nights: Masters Week, Inside And Outside The Gates

MY TOP-5 CARTOONISTS WHO DREW FOR GOLF DIGEST

1.) David Harbaugh, whose tortured Fat Guy cartoons became the inappropriate image of the American golfer after decades inhabiting our back page. My favorite: Fat Guy with red face wildly swinging at tee ball while three playing companions sit on a bench behind him—seeing, hearing and speaking no evil.

2.) Stan Drake (Blondie, The Heart of Juliet Jones), who illustrated my first cover story, “How to Practice Like a Pro” (March 1978).