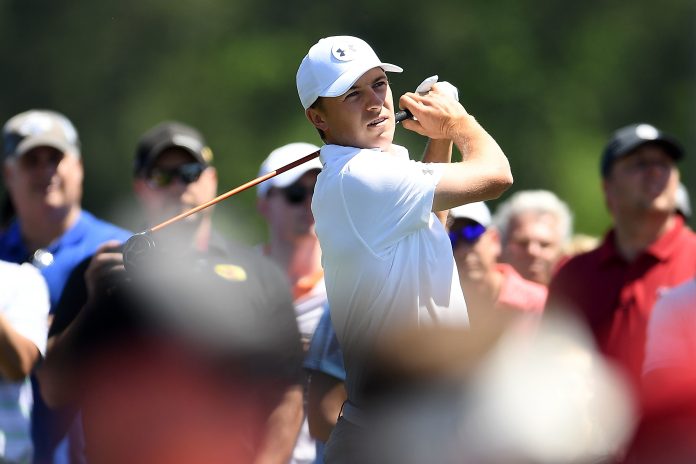 Fast forward to one week from now and most of us would sign up for Jordan Spieth and Rickie Fowler positioning themselves near the top of the leader board heading into the weekend. But for now, we’ll have to settle for this week’s Houston Open.

Spieth, who has struggled mightily with the putter this season, did his best to figure things out on Friday at the Golf Club of Houston in his home state of Texas. After holing birdie putts of 14 and 15 feet on the front nine, Spieth exploded on the back, collecting four birdies in five holes, including a 31-footer at the par-3 14th. His only slip-up came two holes later, leading to a five-under 67 that has him at nine-under 135.

Meanwhile, in the group right behind, Fowler produced a birdie binge of his own, holing four on his opening six holes. He made one more on the par-5 15th, and also made his lone bogey late after rinsing his tee shot at the par-4 18th. Fowler’s four-under 68 puts him one ahead of Spieth at 10-under 134.

Spieth and Fowler are chasing tour rookie Beau Hossler, whose at 11-under 133 after following up a first-round 65 with a four-under 68 that featured just one bogey on his first hole. It’s the second time in as many months Hossler holds at least a share of the lead after 36 holes, the last time coming at the AT&T Pebble Beach Pro-Am. That week, the former University of Texas All-American played his final two rounds in six over par. Despite being in contention numerous times this season, Hossler has just one top-10, which was a T-7 at the Shriners.

Among a large group at eight-under 136 are Matt Kuchar and Henrik Stenson.

The round of the day belonged to Ian Poulter, who carded an eight-under 64 to get to seven-under 137. He’s joined by fellow countryman Justin Rose, who fired a three-under 69.

May Mitchell hold off McIlroy?; Bryson has to turn his airplane...

The particular Toughest Gentleman in the Game! | Golfing Channel