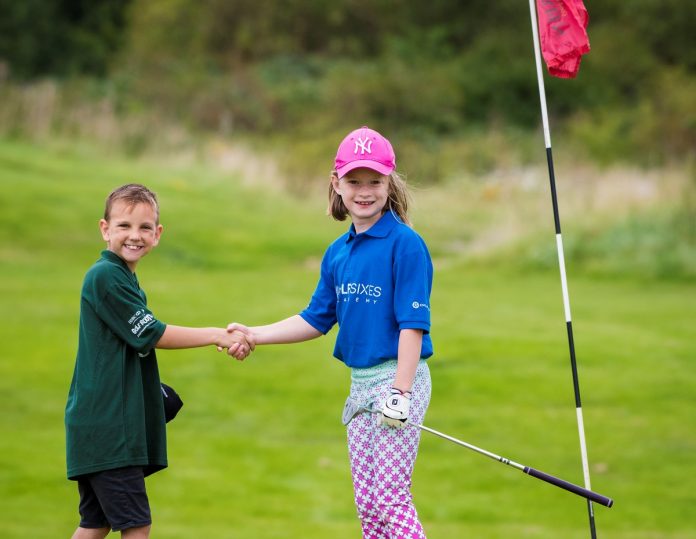 Young golfers in Belgium, Denmark and the Netherlands are set to experience GolfSixes, the European Tour’s innovative short form of golf, as the junior GolfSixes League expands through new partnerships across Europe.

GolfSixes was launched in 2017 with the aim of attracting new and younger audiences to golf and engaging players in the game early in their sporting development is a key part of the long term strategy.

During the first GolfSixes tournament in 2017 the Golf Foundation launched a pilot project introducing six leagues of junior players to the fast and fun six-hole concept, which resulted in a 65% increase in affiliated membership among participants, while 80% of kids said they wanted to play more golf.

Thanks to new partnerships with the PGA of Belgium, PGA Holland and Danish Golf Union, the GolfSixes League is now being rolled out across Europe, while the Golf Foundation is expanding the concept in the UK ahead of the European Tour’s second staging of GolfSixes at Centurion Club in St Albans, near London, on May 5-6, 2018.

Later this month the PGAs of Belgium and Holland will team up to rebrand their respective junior programmes as GolfSixes League PGA Belgium and GolfSixes League PGA Holland. In a major change to their junior programmes, golf is being presented to children and their parents as a team sport, with teams of six boys and girls competing against each other in match play contests.

Last year around 200 young golfers took part in junior programmes in the two countries, and the aim is to grow that to 600 participants by the end of 2018.

In Denmark – the country that triumphed in the inaugural GolfSixes last year when Lucas Bjerregaard and Thorbjørn Olesen lifted the trophy – the Danish Golf Union will host the GolfSixes Danish National Championship on May 19-20, 2018 at Odense Eventyr Golf Club where 32 mixed male and female teams – 16 junior teams and 16 seniors (aged over 19) – will compete.

Meanwhile in the UK, Official Delivery Partner the Golf Foundation is expanding its successful GolfSixes League programme, with more than 1500 boys and girls expected to be coached by club PGA professionals each week in their 12-player squads before displaying their new-found skills at weekends.

There will be 27 junior leagues in the UK – increased from six last year – including two in Wales and three in Scotland for the first time, welcoming teams of youngsters from 125 golf clubs.

With five of Europe’s best female players – Solheim Cup Captain Catriona Matthew, Georgia Hall, Charley Hull, Mel Reid and Suzann Pettersen – taking part in the GolfSixes tournament in May, it is appropriate that this new inter-club team format aims to foster a sense of belonging for new young players including encouraging more girls to get involved.

Keith Pelley, Chief Executive of the European Tour, said: “One of the main aims of GolfSixes is to bring golf to new and younger audiences, and what better way to engage young people than to get them involved in playing this exciting new short format of golf themselves?

“With the second GolfSixes event taking place in May this year, it’s fantastic to see that the concept is already beginning to leave a legacy. The event at Centurion Club is continuing to evolve, this year with the introduction of wildcard teams and female players. If we can further build on this innovation by getting young people excited about playing and watching golf, then that is a true test of the success of the concept.

“Our thanks go to all of our partners in the UK, Belgium, Denmark and the Netherlands for embracing GolfSixes and helping to engage young people across Europe in our wonderful game.”

Thomas Hartwich, Tournament Consultant at the Danish Golf Union, said: “The Danish Golf Union wants golfers to think differently from the traditional 18 holes of golf. The new GolfSixes format is proof that you can do that – you don’t always need to play 18 holes, it’s okay to play six or nine holes and still enjoy the game.

“GolfSixes is more action packed, it’s fun to play – for junior and senior players. We can also have focus on pace of play with a shot clock hole and it is great for spectators to watch.”

Frank Kirsten, Chief Executive of the PGA of Holland, said: “Junior golfers are the future, and by teaming up with the PGA of Belgium under the GolfSixes League we believe this will give the junior programmes in both countries a boost.

“This new format gives young players the chance to enjoy golf as a team experience, and this was received very enthusiastically by PGA golf professionals, youth golfers under the age of 13 and their parents. In this way, golf is presented as a team sport and something that is attractive to children and parents, like football and hockey.”

Bernard De Bruyckere, Chief Executive of the PGA of Belgium, said: “The GolfSixes League format allows children to have a lot of fun, share high fives and become enthusiastic about playing together and helping each other. The children can get used to playing in teams for their own club in a relaxed manner, and with a lot of success.

“Last year, 200 youth golfers were participating in the PGA of Belgium and Holland junior programs. The PGAs aim, together with their respective Federations, is to get to 600 participants in 2018.”

Brendon Pyle, Chief Executive of the Golf Foundation, said: “We are hugely excited by the expansion of the GolfSixes League in 2018 and our partnership with the European Tour. There will be 28 junior leagues in the UK, including two in Wales and three in Scotland for the first time, welcoming teams of youngsters from 125 golf clubs.

“Last year, the pilot project in six leagues showed that this fun and shorter team format encouraged young players to practice and play more often at golf clubs while attracting the interest and support of their parents. This follows the model of other successful team sports such as football, netball and rugby where families new to the sport are welcomed into the club.”

European Ryder Cup Captain Thomas Bjørn and Solheim Cup Captain Matthew will join forces in a world first for professional golf when GolfSixes returns to the European Tour in May. The Dane and the Scot will be the first male and female professionals to play together in a competitive match play format when they form the ‘Captains Team’ – one of four exciting wild card selections introduced to this year’s event, with two of the other three being; an ‘England Women’s Team’ comprising Hall and Hull; and a ‘European Women’s Team’ featuring England’s Reid and Pettersen of Norway. They will join defending champions Denmark, represented again by last year’s winners Bjerregaard and Olesen, with the final wildcard team to be announced soon.

Tickets for the event at Centurion Club on May 5-6, priced at £6 for children and £16 for adults, are available now at http://et.golf/GolfSixesTickets

How to strike it pure with your 3-wood and Hybrids |...