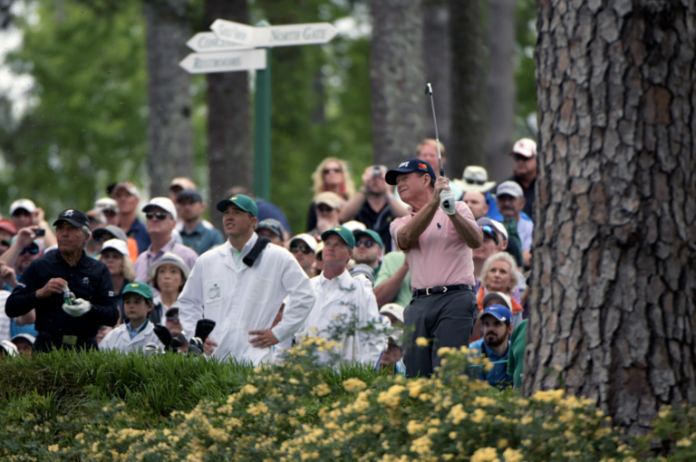 AUGUSTA, Ga.—A day after a pair of 40-somethings grabbed the Masters headlines, a 68-year-old stole the spotlight. Who says golf is a young man’s game?

Tom Watson, 18 months away from 70, turned in a six-under 21 to best Tommy Fleetwood and Thomas Pieters by a shot during Wednesday’s Par 3 Contest.

Watson’s feats weren’t the only fireworks to come out of his group. On the final hole, Jack Nicklaus allowed his grandson Gary to hit. The youngster made the most of the opportunity, making an ace and recording one of the loudest roars of the afternoon:

Dylan Frittelli and Tony Finau also made holes-in-one on Wednesday, although the latter’s was followed by a scary moment, as Finau rolled his ankle in celebration on the seventh hole. He apparently was okay, playing the final two holes without incident.

But the day belonged to Watson, who retired from the tournament in 2016. He had won the event previously…in 1982. He’s just the third green jacket owner to win the Par 3 Contest twice, joining Sandy Lyle and Sam Snead.

RELATED: Why the Par 3 Contest is the best non-event event in sports

Watson also took Slammin’ Sammy’s record as the oldest Par 3 Contest winner, as Snead was 61 when he won the competition in 1974.

Perhaps Fleetwood and Pieters owe Watson a favor: no player has won the Par 3 Contest and Masters in the same year.

The very best DRIVERS in golf (For every type of player!...

Unpacking the flaws of the Official World Golf Ranking system |...

Masters 2018: What are the chances of a firefighter making the...