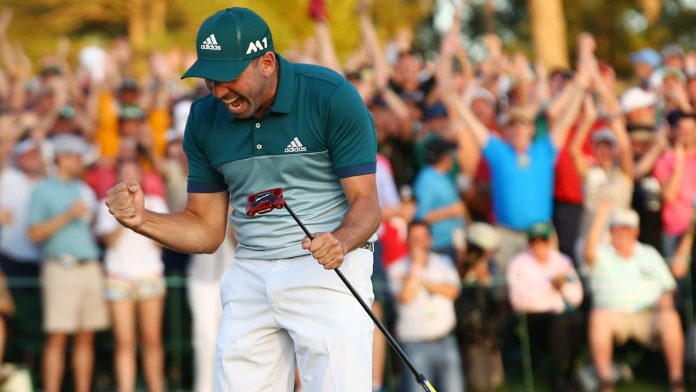 Matt Kuchar finished his 11th Masters an hour in front of the toothsome twosome that owned 2017, Sergio Garcia and Justin Rose.

Another chance to break through as a major champion was gone for Kuchar. But not the opportunity to enjoy a second-hand soak in the experience.

So, rather than take his clubs and go home, he scooped up his two sons and returned to the course. Why not wring as much from the day as possible?

“It was getting exciting and I said, let’s go watch them on the course and watch them finish,” Kuchar said.

“We’re friendly with both Sergio and Justin (Garcia’s playing partner all the way through a playoff) and my boys know them well. It was awfully good golf they played coming in. It was very, very impressive golf. Fun to watch. Fun to be part of. I think my boys were really excited about the game of golf in general watching that.”

OK, Dad, Garcia at the age of 37 won the Masters while throwing off the yoke of having all this talent with no major championships to show for it. Isn’t about your turn now?

“I treat some of that stuff as motivation.”

Shooting a Sunday 67, tied for the day’s lowest round, Kuchar ended up tied for fourth last year. It was his second-best Masters finish (T-3 in 2012). Still short of the ultimate goal.

This year, more than one-third of the smallest Masters field in decades — 31 players — own at least one major title. Garcia’s Masters victory plucked a multitude of strings, but one of the chief chords was the title he lost that day. That of “Best Golfer to Have Never Won a Major.”

Of those untitled players attending this week’s intimate gathering, only a few really contend for that dubious title. But all of them certainly borrowed encouragement from what Garcia did a year ago.

Kuchar, for the record, is very near the top of anyone’s BTNWAM list.

With 10 top-10 finishes in the majors, Kuchar’s best chance to break his maiden at one came just last summer at the British Open. He led the thing with just five holes to play. But Jordan Spieth went crazy. He saved bogey from seemingly some other European country and then spit out five straight birdies to end up three shots clear of Kuchar.

As he processed that close call, first there was the agony of the defeat. “I was hurting on the inside,” he said. “You get so close. It’s like any sport, it’s tough when you get so close and end up losing. If you get beaten and beaten badly, you kind of dust it off and go oh, well, I got beat and I’ve got work to do. But when you’re that close it’s a little extra harder to swallow.”

Then there was the idea to treat it as one more log on the fire. “Losing always provides motivation,” Kuchar said. “Winning breeds some contentment and complacency. I certainly would love to be content and complacent. But I finished second. Lost to an amazing finishing round of golf. I tried to use that as motivation.”

While an amateur at Georgia Tech, Kuchar had two relatively spectacular Masters experiences, making the cut both times and finishing the low am in 1998. As a pro, he has finished eighth or better in four of the past six years.

“I’ve got some amazing memories there. Winning it certainly would be icing on the cake,” Kuchar said. “I’ve done a lot of fun things there, have a lot of great memories and I look forward to my week there every year.”

Along with Kuchar, England’s Paul Casey, at 40, put himself back on the watch list with a March 11 victory at the Valspar Championship. This will be his 12th Masters coming up, where he has finished no worse than sixth each of the last three years.

Better believe he took a little something from Gracia’s Masters win.

MORE: Who is statistically the best player without a major championship?

“And Henrik (Stenson) winning the Open Championship in his 40s (in 2016). And Phil winning at 47 (March 5). Without question, I take all that as a really positive sign.”

And representing, barely, the 20-somethings on the list is the 29-year-old Rickie Fowler. He has been steadily moving up the BTNWAM list through the years. He’s a hard one to miss in those orange pants.

It was 2014 when Fowler finished in the top five in all four majors — Jack Nicklaus and Tiger Woods have been the only other ones to do that in a season. Those other two fellows, however, have distinguished themselves by finishing in the top one a few times.

Fowler was playing just one group ahead of Garcia/Rose on Masters Sunday last year. He, in fact, has had a very good view of Garcia’s very fine year, at Augusta and in Austin, Tex., for Garcia’s wedding in July. Fowler was not, however, in the delivery room for the birth of Garcia’s first child last month. There are limits.

There is just one of those big life events on Fowler’s mind at the moment. “Hopefully I can get my first major here soon,” he said.

In seven swings at the Masters, Fowler’s best showing was the T-5 in 2014. Yet, he says, “I know Augusta’s a place that I can play well at. I know it’s a place that I can win at. I put myself in good position last year, obviously didn’t have a great Sunday (shooting 76, finishing T-11).

“I’m very comfortable (at Augusta),” he said. “It’s a fun golf course to play. I feel good. I know I can play well there. I put myself in decent position a couple times. It’s time to go have a good week.”

No better time, while the Garcia precedent is so fresh.

This article is written by Steve Hummer from The Atlanta Journal-Constitution and was legally licensed via the Tribune Content Agency through the NewsCred publisher network. Please direct all licensing questions to legal@newscred.com.

John Rahm: American Express course is ‘a bit too easy’ |...

Shows: Rory McIlroy surges within Round 3 of Dubai Desert Classic...

The key Move To Create Lag Within the Golf Swing |...