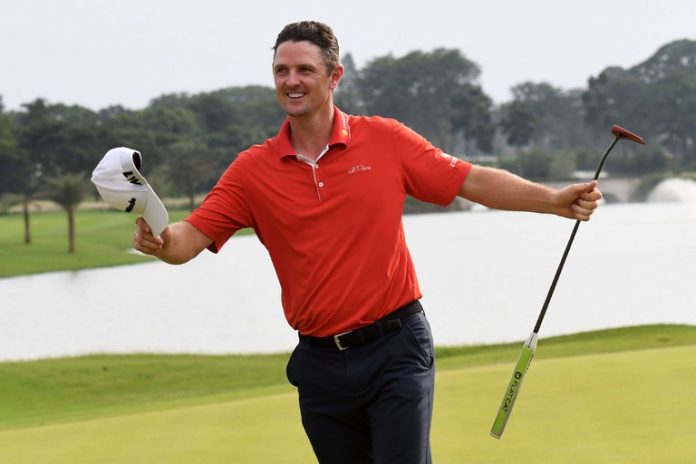 Day 2 is underway at Augusta National—coming off an exciting Thursday afternoon at the Masters. We saw Jordan Spieth do something he had never done here, birdieing five straight holes (13 through 17), before a miraculous bogey save at 18 to take the lead at 6-under. We also saw defending champion Sergio Garcia make a mess out of the par-5 15th hole; his octuple-bogey 13 is the highest-ever recorded score on that hole in Masters history. Not exactly the start Sergio expected from his return walk around Augusta National.

What was clear was the late groups got the edge in terms of conditions. Some cooler, windy conditions in the morning didn’t generate too many low scores, or fireworks, for that matter. But the afternoon groups had clear and calmer weather to play through. And we saw a number of the low scores come through the afternoon wave. We’ll see how that shakes out on Friday—with another great, sunny day expected the Masters.

Also worth watching is how some of the world’s best players, who aren’t on the top of the leaderboard but just lurking five or six shots back, and whether they can make a move on Friday. Most of the top-10 players in the world are within earshot of the lead. Rory McIlroy starts the day three back of Spieth. Rickie Fowler starts the day just four back—as does his playing partner, Phil Mickelson. Justin Rose is even-par and starts the day six back. Dustin Johnson, Hideki Matsuyama, Bubba Watson, and the four-time Masters champion, Tiger Woods, are all 1-over and not nearly out of this. Friday should be another exciting day at Augusta.

NEW: Get access to the best instruction from the best pros—enroll in Golf Digest All Access today

9:55 a.m.: Tony Finau’s second round is underway. And it did not begin the way he wanted.

The bomber found the fairway bunker to the right—but hit a great third shot to three feet for a chance to save par. Putting has been Finau’s weakness, and Finau missed the short putt to drop to 3-under. A disappointing start—but you’d expect him to threaten to bounce back with a birdie at the par-5 second hole.

9:47 a.m.: Haotong Li has been an escape artist of sorts in his first two holes. His first drive was way left—and his tee shot at No. 2 also soared way left into this lie.

Li hit a tremendous hooking iron shot back into the fairway. Li will make a par after a nice third shot. That’s a solid start after such poor tee shots to start with.

9:33 a.m.: As Tony Finau’s making his way to the tee, Haotong Li and Fred Couples are finishing up on the first green. Couples, back injury and all, hit a terrific tee ball (289 yards) and hit it to nine feet for a chance at birdie. It was a disappointing par, perhaps, but still impressive for the 1992 Masters champion to sit at even-par so far through the tournament.

Li did very well to make par from the way left-hand side at No. 1. He has hit another errant tee shot at No. 2.

9:23 a.m.: What an amazing shot by Li at No. 1. It looked like he might’ve been in trouble with an errant tee ball. But his drive went so far left, he had a clear approach over the trees. And the two-time European Tour winner hit a fantastic recovery to find himself a birdie putt. Well done by the world’s 42nd-ranked golfer.

9:15 a.m.: China’s Haotong Li, the 22-year-old who sits at 3-under par, has teed off at No. 1—and his tee shot has went way left. He’ll have his work cut out for him to save par on the opening hole, which has played as the fifth toughest hole on Day 1.

8:58 a.m.: Cam Smith is playing in his first Masters, having secured a spot by sneaking into the top-50 in the world after the WGC-Match Play. Smith has had a great 2018, and would be someone whose game you might expect would translate to success at Augusta National—his ball flight with his irons is super high, and he hits the ball far and straight with the driver. The young Aussie is currently 1-under and five back of hte lead, bogeying the first hole but getting it back with a birdie at No. 2.

8:45 a.m.: Tony Finau is back in the practice area as he prepares for his 9:36 a.m. tee time. He was walking gingerly as he started his practice routine, but he’s now ripping driver pretty freely. Golf Channel’s Todd Lewis reported that he spoke to Finau’s agent, and Finau apparently feels better today than he did on Thursday. It seems his ankle is responding very well to the treatment he’s receiving. We’ll see how he handles the pressure of being around the lead now here on Friday. As you wait for the leaders to tee off, read Dave Kindred’s piece, in which he puts Finau’s spectacular 4-under 68 on Thursday in perspective.

8:30 a.m.: The second round has officially started! Billy Horschel, Cam Smith and Chez Reavie have teed off No. 1 to kick things off.

Though some of the more exciting pairings this morning at Augusta won’t tee off until about 10:30, there will be leaders on the course early this morning. Some of those are: Haotong Li, who starts the day 3-under par and three back, tees off at 9:14 a.m.; Tony Finau, who had one of the more amazing rounds of Thursday, given his nasty-looking ankle injury during Wednesday’s Par 3 Contest, shot an opening 4-under 68. Finau tees off at 9:36 a.m.

Feherty proves he’s far from being a golfing whisperer

Photos of the Week | ISPS Handa World Cup of Golf...