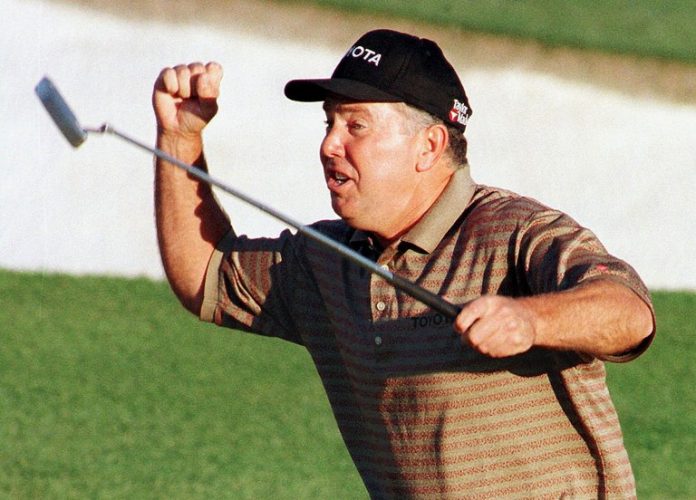 AUGUSTA, Ga. — Barring a miracle, Friday will be Mark O’Meara’s last competitive round at the Masters. The1998 champion, who turned 61 in January, did everything but make an official announcement after shooting an opening-round 78 on Thursday.

“I’ll have something to say after tomorrow’s round, but this is probably going to be it for me,” he said. “It’s a big golf course for me nowadays. You’ve got kids out here regularly hitting it 315 and I’m hitting it 265. That makes it awfully tough to compete.

It was 20 years ago that O’Meara became a surprise winner at Augusta, birdieing three of his last four holes to claim the title in his 15th start, the most attempts by a first-time Masters winner until Sergio Garcia broke it a year ago when he won in his 19th.

“Being a Masters champion has been such a great thing,” O’Meara said. “ It’s nice to be able to go out on your own terms. My wife and some of my friends have said, ‘Go on play a few more years,’ but I think it’s my decision, and I think the timing is right.

“Last year was my last year exempt at the Open Championship and I got to play at Birkdale, which is where I won 20 years ago, so it was great. It was very emotional.

Friday will be O’Meara’s 106th competitive round in the Masters. The most memorable was the final round 20 years ago. O’Meara beat Fred Couples and David Duval down the stretch, holing a 20-foot birdie putt at 18 to win by a shot. That was also the last year that Jack Nicklaus seriously contended, finishing tied for sixth.

O’Meara was playing in his 15th Masters when he finally won the green jacket in 1998, with birdies on three of his last four holes including the 18th.

Duval, who never won the Masters, tells the story about watching O’Meara make that putt from the Bob Jones cabin, where he had been taken in case of a playoff. Jack Stephens, then the club’s chairman, was watching with him.

“He said, ‘David, nothing to worry about here, nobody every makes this putt. They all mis-read the break because it breaks more left than they think.’ When Mark made the putt, he stood up, shook hands and said, ‘Well, we’ll see you back here next year.’ ”

O’Meara actually did read the putt with slightly less break than was actually in it. “I played it one ball further right than my eyes told me because my gut told me it wouldn’t hold the line if I putted it where I read it.”

He was right and the result was his first major title at the age of 41. Less than four months later, he won his second major at Birkdale. That was the last of his 16 wins in PGA Tour-sponsored events.

The question now is whether a few other past champions might join O’Meara in announcing that this is their farewell to the tournament. There is speculation that 1988 champion Sandy Lyle, 60, and 1991 winner Ian Woosnam, 60, may also make similar decisions. Both would not say where they were leaning earlier in the week. Lyle shot a two-over 74 while Woosnam shot a seven-over 79.

Rory McIlroy not too despondent after runner-up at The 150th Open...

Highlights: Hudson Swafford’s electrifying Round 4 at The American Express |...