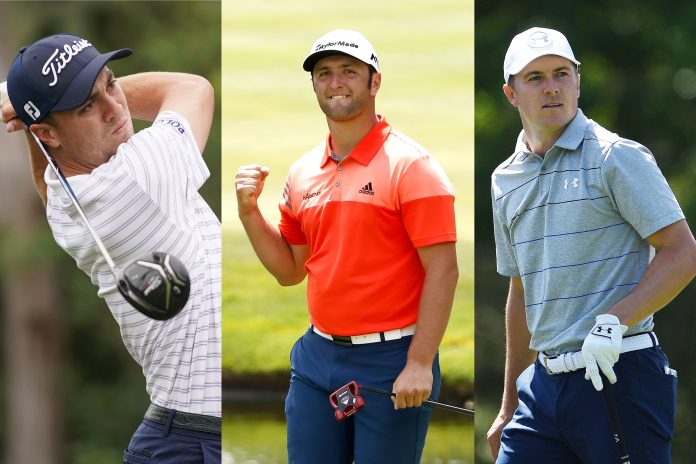 AUGUSTA, Ga. — There is, of course, a major championship on the line this week at the Masters, winning the green jacket being the first and foremost thing on players’ minds. But for a trio of golfers, another prize is available with a solid showing: the title of World No. 1.

Justin Thomas, Jon Rahm and Jordan Spieth all have the chance to climb past Dustin Johnson, who has been No. 1 for the past 59 weeks, if certain scenarios play out.

Thomas has the easiest path. If he wins the Masters, he automatically rises to the top regardless of how anyone else performs (which seems only fair in that he’ll have won the last two majors, you should be No. 1 if that’s the case).

A series of other top finishes also could do the trick for Thomas:

Two weeks ago at the WGC-Dell Match Play, Thomas had a shot at becoming No. 1, and noted that he struggled keeping it out of his mind as he worked his way through the match-play bracket.

“I haven’t had such a hard time not thinking about something so much,” Thomas said after his semifinal loss to Bubba Watson. “And that really sucked. I couldn’t stop thinking about it, to be perfectly honest.”

Something tells us the weight of a major will be enough to keep the specter of becoming No. 1 from becoming too overwhelming.

There’s one other player whose spot on the World Ranking might be of interest: Tiger Woods. He’s currently ranked No. 103. With a victory at Augusta, he could climb as high as 22nd. A runner-up finish could push him to 38th and a top-three finish gives him a chance to move inside the top 50.

Exactly how Folds of Honor scholarship or grant opens doors for...

Masters Ranking: The top 13 picks to win the 2018 Masters