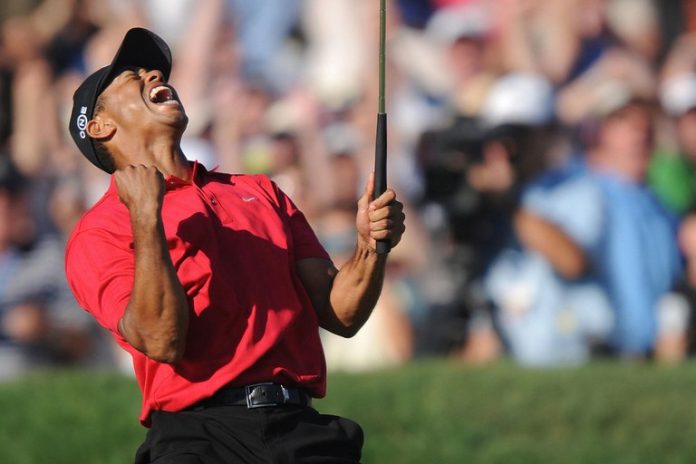 AUGUSTA, Ga.—The practice facility at Augusta National is a quiet nook. Traffic surrounds it, especially with the commotion generated by the new Masters Golf Shop, which sits adjacent. But on a property that screams serenity, the range is a special place of repose, where patrons sit under a canopy of clouds to soak up the sun like they are at the park. It’s usually where one can gather their thoughts and enjoy the scene in peace, which is why I headed there for an afternoon breather.

But this is not your usual Masters.

It’s all been building up to this, Tiger Woods’ latest comeback. It began with a glimmer of hope in December at the Hero World Challenge, albeit soaked in reservation. Yet it—“it” being anticipation, fervor, nostalgia, and every other emotion the man conjures—gained viability at Torrey Pines, took a leap forward at PGA National and came off the rails at Innisbrook and Bay Hill. Tiger was back, and more importantly, would be back at the Masters.

“Can Woods win his fifth green jacket?” It’s been asked ad nauseam the past decade, but for once, an ominous tone isn’t attached. There are a host of storylines for this year’s Masters, plots that have made this tournament arguably the most hyped in its storied history. But since his runner-up at the Valspar Championship, the Tiger narrative is the only one that’s mattered. It borders on fantasy; some still can’t believe, with all he’s been through, that it’s actually happening.

So when the 14-time major winner emerged on the practice facility just after 2:00 p.m. on Monday, that normally-reserved setting was shot to hell.

The stands exploded, patrons giving the 42-year-old an ovation on the driving range. An entrance, and response, usually seen at Wrestlemania.

While wrestling parallels are not typically made at the Masters, Tiger’s appearance injected a buzz, like the moments before a big match or prize fight begins. The tournament doesn’t start for three days, but Woods’ mere presence made the proceedings, during a practice round, matter.

It also had to be the first time in the annals of the Masters that a player was deemed the favorite by his gait. “See the way he’s walking?” a man asked. “He’s feeling it. He knows it.” Another commented that, judging by the rhythm of his strides, Tiger was pain-free. There’s a reason “mania” is often attached to his name.

As he normally does, Tiger drew a crowd, the confines quickly becoming suffocating. So I headed off to the course, hoping to find refuge at Amen Corner. But word had spread that the great Woods had arrived, and I was swimming upstream in a sea of patrons.

“He’s here!” yelled a grown man. “We gotta go to the first hole!” said another, which proved to be a wise move. (Woods would eventually make his way to the front with Justin Thomas and Fred Couples.) They weren’t bowling each other over—let it be known that, even in hysteria, the patrons at Augusta National remain respectful—but, given their moves up No. 10, a fair share of folks could have qualified for the Olympic speed-walking squad.

I finally reached the concessions behind No. 12 tee. It was calm, breathable. Behind the tee’s bleachers sits a board announcing which players are on the course and practice tee, their tee times attached. A boy walked in front of me, glanced up, saw “Woods” on the sign and feverishly grabbed the side of his dad’s shirt.

“Tiger!” he said in astonishment. “TIGER!”

The boy darted off, and I realized my search for quiet was futile. Not with Tiger-mania back at Augusta National.

Holes-in-one at the Masters: Vote for the best all-time Augusta ace

Friday at the Masters: Photos and what the best of the...