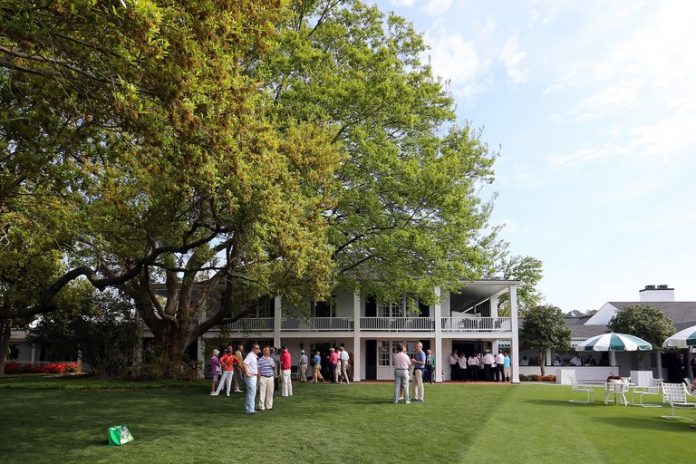 AUGUSTA, Ga. – Sam the Boss suggested going to the new Masters merchandise building. It’s the only place in the world where you can buy Masters-branded stuff. Once upon a Bobby Jones time, they sold everything out of a tent along Magnolia Lane. Now it’s a gynormous state-of-the-art building, brand new this spring, and Sam the Boss wondered how much money runs through there.

If Augusta National Golf Club knows the $$$ figure, it’s not sharing. The green jackets are secretive about everything, from gallery sizes to number of pimento cheese sandwiches inflicted upon unsuspecting customers. We’re left to guess how much merchandise moves out of that building. I made three research trips there and I am here to say it is impossible to walk in and walk out with all your money.

My research included standing outside the building and ambushing people who could have used a Sherpa to carry their goodies.

There was Josh Johnson, of Dallas, Texas. At his feet, three bags full of stuff.

I asked for an inventory.

He read from a receipt.

And what’d it all cost?

A woman nearby, speaking with urban-myth certainty, said, “They took in $20 million Monday.”

That’s a lot of Masters underwear at $35 per brief. A Masters dog collar, $17. The Masters Garden Gnome, in a caddie’s white jumpsuit, looks like Fluff Cowan, $18.

There are 64 cash registers. There are 385 mannequins, including one Masters-bedecked dog (not for sale, though you can buy its food dish, $18).One young man’s 12-hours-a-day job is to take shirts off hangers and fold them properly before dropping them in a shopping bag. In the “Headwear” section, there are 125 versions of caps and hats with Masters symbols guaranteed to cause envy among the boys back home at the Goat Hills muny.

My first time through the building took an hour and a half. We entered—I say “we” because I was maybe 1,000th in line at 9 a.m.—we walked through one of those Disneyland-like mazes of back-and-forth lanes designed to keep you moving and give you no chance to change your mind about the absolute need to take home two wine glasses etched with a Masters logo, $28. Yes, I bought the wine glasses. And a pullover. And a cap. The damage: $127.44.

Outside, I ambushed J.M. Singh and his wife, Pauline, here from Chandigarh, India. They’re here in support of a hometown player. Shubhankar Sharma is 21 years old, a professional four years, twice a winner on the European Tour, here on a special invitation from Augusta National.

Bags of stuff in hand, Singh said, “Shubhankar can be an inspiration to Indian youth and Indian golf. To be here, is beyond imagination. To walk out here—it is so perfect I would be scared to take a divot. This is not like the courses we have in India.”

The Singhs are 7,785 miles from home and loving it.

“We heard so much about we’d have trouble in what you Americans call ‘the South.’ But everybody we have met has been so very friendly. You see all these people?”

Thousands of people, he meant, all moving lightly, smiles all around, happy people in glad circumstances.

“In India we go to the national cricket championship and there may be 100,000 people and we never want to go again. This, here, we want to stay.” I asked what they’d bought.

My second trip through the merchandise building, I looked at high-end stuff.

I did look at playing cards. The face cards came with hidden Augusta icons, such as magnolia blossoms and azaleas, designed by a local artist, Haley Tam Wood.

That day I spent $147.96. A bracelet demanded to go home with me. A “vintage” cap spoke to my wasted youth at the Highland Park muni in Bloomington, Ill.

Jon Jacobson and Joanne Brookes are veterans of golf shopping. She wore a 2016 U.S. Open shirt from Oakmont, but pointed at her partner and said, “He’s the shopaholic.”

He said the “best part of this is, they don’t do jacked-up prices. A Peter Millar sweater at a fine clothing store will cost you $165. Here, that sweater – with the Masters logo – avai!)lable only here – and available only this week of the year – it’s $165.”

Let’s say 50,00 people come to the three practice days of the Masters. Let’s say half of them go through the merchandise building. Let’s say they spend $1,000 apiece. (The average skewed by corporations and Japanese tourists.)

That’s $25 million a day, $75 million for the practice days, plus, let’s say, another $50 million in the tournament’s four days when the crowds are smaller — $125 million, total.

Me: “So I put it on the expense account, right?”