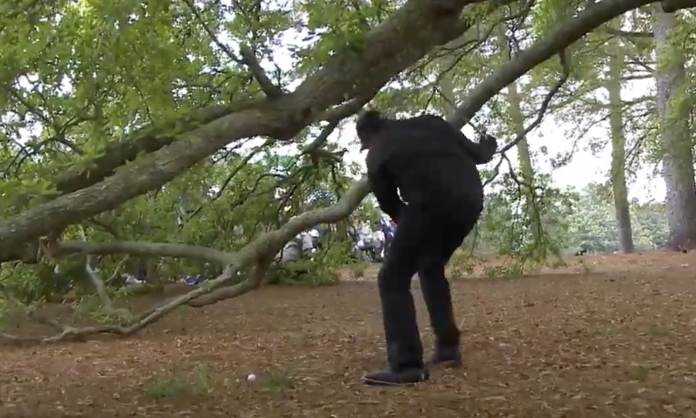 AUGUSTA, Ga. — There has always been a bit of a relief-pitcher mentality in Phil Mickelson, a golfer who has been known to flame out on the course in spectacular fashion only to come back the next day as if nothing ever happened.

Saturday at Augusta National, however, doesn’t look like it’s going to be one of those days.

To set the stage: Mickelson shot a 79 on Friday—making a triple bogey and a double bogey along the way to equal his worst score in 96 rounds played in the Masters. The saving grace was he made the cut on the number, allowing him to return to the course in hopes of making amends in Round 3.

But in a steady drizzle, Lefty pulled his tee shot on the par-4 first hole, the ball coming to rest in pine straw under a big oak. And then he did this:

If you’re scoring at home, that was a whiff with his second shot (complete with a nasty crack of the tree with his club for good measure), followed by a punch out to the fairway for his third, a missed green with his fourth, on the green in five, two-putt for a double-bogey 7.

Sadly, it didn’t get any better on the second hole, Mickelson hitting his tee shot into a fairway bunker and knocking it around for a bogey 6.

Decked out in black rain gear, wearing a pair of gloves and looking rather miserable, the three-time green jacket winner probably wished he hadn’t gotten out of bed just then. Or that he missed the cut by one.

Relive the best moments of the Sentry Tournament of Champions |...