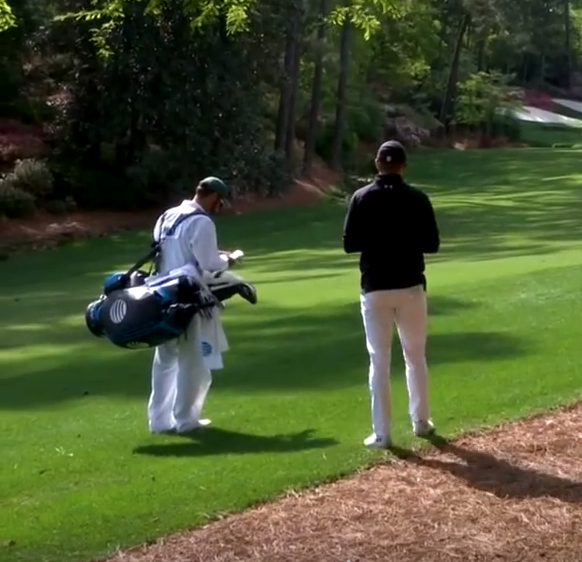 Jordan Spieth and Michael Greller have given us plenty of great moments in their relatively short time as a team. There was the “Go get that!” at Royal Birkdale, the flying chest bump at the Travelers Championship, and of course, the “What would Arnie do?” conversation in the pine straw on No. 13 at the 2017 Masters. But in a similar position a year later during Sunday’s final round at Augusta National, the two gave us another epic conversation. You just probably didn’t hear it, because CBS chose not to show it for some reason.

Luckily, Masters.com coverage of Amen Corner picked it up, though, and while we aren’t allowed to show you that video, we have transcribed the conversation that lasted about 90 seconds (Yes, that’s a bit long to take on a shot, but Shh… It’s the final round of THE MASTERS!) before Spieth hit a spectacular shot to set up an eagle attempt from about eight feet. Here’s the back-and-forth between player and caddie that led to one of the tournament’s most memorable moments:

SPIETH: It’s a 4-iron, right? Stock 4-iron? What’s it to fly (inaudible)? I could hit hybrid as well and play a fade. What’s the wind doing?

GRELLER: East-Northeast off the right. . . . I like the hybrid more than that.

SPIETH: How do you feel?

GRELLER: I see it fits the the shape of the hole better, it gives you more margin or room. You know? I feel like a 4-iron is perfect. But if it gets right at all. . .

SPIETH: The lie’s OK, I kind of have to hit it a groove low.

SPIETH: But I still like this. If I hit it long left, it’s still not bad, you know?

GRELLER: No, I agree. What’s your start line?

SPIETH: I’m at the middle of the green bunker. You said it’s off the right a little?

It’s a good thing Spieth took the extra club as his shot barely cleared Rae’s creek before bounding up by the hole. Spieth wasn’t able to convert the eagle chance, but the tap-in birdie was part of his spectacular final-round 64 that nearly produced one of golf’s all-time greatest comebacks. And the scene was yet another reminder of why Spieth and Greller are one of the best — and most entertaining — tandems on tour.

Highlights: Bryson DeChambeau has wild Round 3 finish at The 150th...

The best celebrity moments from Round 4 at the Pebble Beach...