As it is with most places of reverential significance, the Augusta National Golf Club is tucked away in a quiet corner. Augusta, a central eastern town of Georgia, sits on the banks of the Savannah.

A pilgrimage to the estate, down the famed Magnolia Lane, is an essential journey in the evolution of a golfer. Augusta is a temple where time stands still. And it is where golf goes each year, for a uniquely poignant spring festival amidst a timeless setting of subtle serenity.

The Green Jacket is a status symbol unlike any in the game of golf. Especially so when you earn it on a spring Sunday by outplaying the very best men in the game. It is an exclusive, invited field — only the top 50 men in the ranking order, PGA Tour winners of the current season, past Masters champions, earned exemptions, a handful of amateurs and special invitees make up an elite field. There will be just 87 men this year, the smallest field since 1997. One of them is a rising Indian star, languishing at 521st in the world just a few months ago.

Since then he has stormed into the global spotlight — with two wins on the European Tour and a rousing performance in the WGC Mexico Championship. 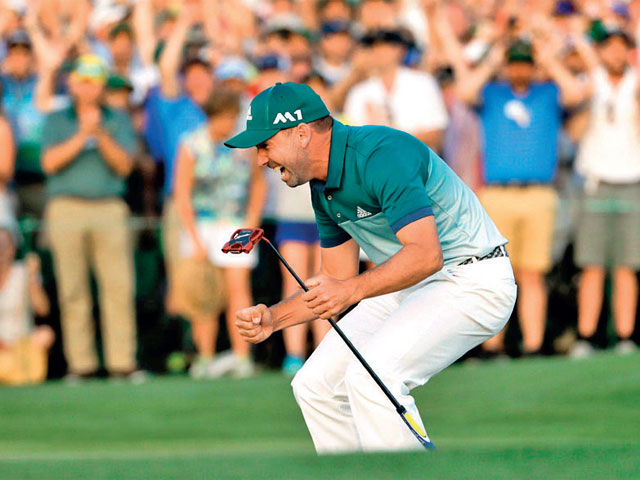 This week, he will become the eighth Indian to play a major. Along the way, Shubhankar Sharma soared from his lowly November ranking to 68 in the world now. He will ride through Magnolia Lane on a special invitation from the Masters.

At the only constant major venue in golf, that must feel like being wide awake in the thick of your wildest dream. He will have two practice rounds and the familial par-3 contest to allow dream and reality to dissolve into one. On Thursday, Shubhankar will become just the fourth Indian golfer — Jeev Milka Singh (3 apperances), Arjun Atwal (1) and Anirban Lahiri (2) being the others — to experience the joy of playing in this event. And there is heightened interest in the 82nd edition of the Masters.

The return of Tiger Woods, his legion of fans aroused by a run of 10 rounds of par or better, is sending expectations northward. Woods has been installed odds-on favourite (10-1) along with Dustin Johnson, Rory McIlroy and Justin Thomas. “I’ve been better with each week I’ve competed,” said Woods in a statement on his website.

“A little more crisp. I’m starting to put the pieces together. “I’m just really looking forward to playing. It’s the best run tournament in the world. The golf course, the patrons, the entire atmosphere. It’s a golfer’s heaven.”

Phil Mickelson, three-time winner in Augusta, is back in the frame. His victory in the WGC event in Mexico ended a drought that stretched back to the Phoenix Open in 2013. While Thomas has been the runaway player on form this season, Bubba Watson has thrown his hat in the ring with an impressive victory in the WGC Dell Match Play.

The fact that he vanquished Thomas on his way to the finals should do his confidence a world of good. Sergio Garcia is a liberated man, ever since he first adorned the Green Jacket. His love for life has grown deeper since then. Golf channel reporter, Angela Akins and Garcia turned parents this March, with the arrival of a beautiful little girl.

The joyous parents named the girl Azalea, after the flowers that decorate Augusta and the 13th hole at which Garcia made his poignant move towards victory in 2017. An encore might take some doing though, only three men have succeeded in defending the Masters since its inaugural edition in 1934 — Jack Nicklaus in 1966, Nick Faldo in 1990 and Woods in 2002, a club that seems nearly as hallowed as the Masters itself.

McIlroy’s journey to Augusta is never short on ambition or angst. The young man is already a four-time major winner, needing just the Green Jacket to complete his collection of majors. He will back in Augusta for a tenth time, to quench his thirst for a career grand slam. But McIlroy is far from a lone warrior. After all, this is where golfers of all hues assemble each year to taste the elixir of its soul.

The writer is a columnist with GolfingIndian.com

DISCLAIMER : Views expressed above are the author’s own.

The Golf DREAMLAND – Bay Slope with Golfholics and Mike Capone