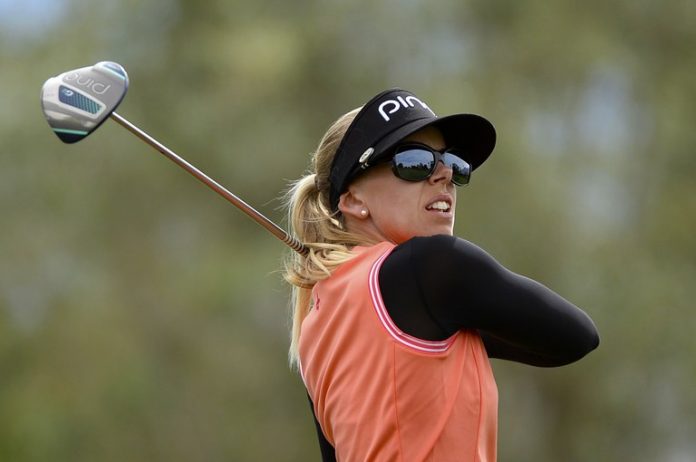 Pernilla Lindberg of Sweden on the seventh hole during round three of the ANA Inspiration. (Photo by Robert Laberge/Getty Images)

RANCHO MIRAGE, Calif. — Pernilla Lindberg went up a mountain on Friday afternoon, 8,615 feet above sea level, that represents a hillock compared with the Everest she will face on Sunday.

Lindberg, a 31-year-old journeyman from Sweden, has never won as a professional, either on the LPGA or Ladies European Tour, has never finished higher than a tie for 18th in the ANA Inspiration.

And there’s this: She has never held a lead entering the final round of a tournament, until now. If she thought it was difficult breathing atop San Jacinto Peak…

Her lead is three over another upstart, American Amy Olson, who has never finished better than tied for seventh. Inbee Park, at 27 the youngest player ever to qualify for the LPGA Hall of Fame, heads a group of six tied for third and trailing Lindberg by four.

Lindberg will attempt to keep from overthinking what is at stake by replicating her experience Friday afternoon, when she and her family took the Palm Springs Aerial Tramway to the top of the mountain that provides the western backdrop to the Dinah Shore Tournament Course at Mission Hills Country Club here.

“You know, try to just kind of keep my mind off it,” she said. “That’s what I’ve been doing these few days. Yesterday afternoon I went up the mountain in the gondola there and went hiking up there and had a nice dinner with my parents and just kept it low key. Not really even talked much about golf, and that’s what I’m going to keep doing.”

On Saturday afternoon, as she waited to begin the round, she turned to her caddie/fiance Danial Taylor.

“How cool is this experience?” she said to him. “It’s not very many people that get to do this, play a major, out in the last group? Let’s just have fun. Let’s just enjoy it.”

She holed a 20-foot birdie putt at one. That was fun. “It just brought a smile to my face to start the day,” she said. “I felt great walking up to the first tee, walking down the first fairway. But, of course, starting like that, is as good as it can be.”

She made her first bogey of the tournament on the fifth hole. That was not fun. Yet she maintained her equilibrium by holing another 20-footer to save par at six.

“Huge,” she called it. “We talk a lot about momentum in golf and that was really a momentum keeper there. I hadn’t missed many greens. I hadn’t made a bogey all week until five, and then to maybe make back-to-back bogeys, obviously that would have kind of felt like I swung the momentum the other way.”

She made three birdies and only one more bogey the rest of the day and will venture into foreign territory on Sunday, the final group, with the lead.

“Every day has just been great for me,” she said. “Walking off the first day, being in the lead, I followed that up with another low round. That’s not easy to do, and I did that, then going out in the lead today and extending it. They’re all great achievements. So obviously everything gives me a boost.