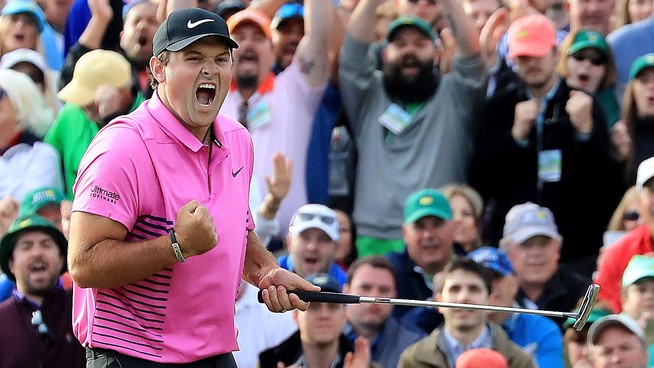 Patrick Reed held off a charging Rickie Fowler and Jordan Spieth to win the Masters Tournament after a dramatic final day at Augusta National.

The American entered round four with a three-shot lead but engaged in an enthralling battle with his two countrymen on the back nine, signing for a 71 to finish at 15 under and beat Fowler by a single shot.

It looked like 2015 champion Spieth would be winning a second Green Jacket as he surged through the field in stunning fashion but he bogeyed the last in a 64 to set the target at 13 under.

Fowler birdied four of his last seven holes in a 67 but Reed showed nerves of steel down the stretch to win a first Major Championship and a second European Tour title.

Reed did not achieve a single top ten in a Major in 15 attempts after making his debut at Augusta in 2014 but he has now put his name in the history books, following on from a tie for second at the US PGA Championship last season.

“It’s almost impossible to put into words,” Reed said before being presented with his Green Jacket in the Butler Cabin. “Just to make the par on the last and watch the ball go in the hole and know that I’ve won my first Major.

“One of my huge goals this year was to not only contend in Majors but also get back in that winning circle. To do it in the first Major and finish off that drought, it just meant so much to me.”

For Fowler, it is a third runners-up finish in golf’s four biggest events, while Spieth continues his remarkable record at this venue, adding a third to his win and two seconds in five attempts.

Rahm secured his first top five at a Major after a stunning campaign last season, finishing third in the Race to Dubai Rankings presented by Rolex with two victories on the European Tour.

Spieth began the day nine shots off the lead but he put his approaches to seven feet on the first and three feet on the fifth, sandwiching a textbook birdie on the par five second to edge closer.

He again made the most of a par five on the eighth and when he made another gain from 12 feet on the next, he had turned in 31 to get to double figures.

Reed bogeyed the first as he failed to get up-and down from the sand but holed a putt from the back fringe on the third for birdie before three-putting the sixth.

An approach to tap-in range gave him a birdie on the seventh but Spieth holed a 30-footer from the fringe on the 12th and then birdied the 13th after an incredible second set up an eagle chance from 12 feet.

A poor tee-shot from Reed on the 11th saw the lead cut to one but he bounced back with a birdie from 22 feet on the 12th.

Ahead on the 15th Spieth had another eagle chance but settled for a birdie to trim the gap again while Fowler set about putting himself in contention.

He bogeyed the fifth but fought back by making the most of the eighth and hitting a stunning approach into the ninth. A tee-shot to nine feet on the 12th edged him closer and an excellent up-and-down on the next had him two off the lead.

That lead was shared by Spieth when he birdied the 16th from 33 feet but Reed hit back again, with an approach to eight feet and a birdie on the 14th.

Fowler took advantage of the 15th and while Spieth’s closing bogey gave Reed some breathing space, the 2016 Abu Dhabi HSBC Championship winner birdied the last to take the drama right to the final green.

Rahm made the most of the second with two putts from 48 feet and put his approach to the short third to five feet. He bogeyed the fourth but another nice approach brought a gain on the seventh before five pars in a row saw his momentum stall.

Back-to-back birdies on the 13th and 14th had him right in contention before he found the water on the 15th for a bogey.

McIlroy hit stunning shots into the second and fourth but followed those birdies with bogeys and the Northern Irishman eventually signed for a 74, with Swede Stenson carding a 70 for a first Masters top ten.

Australian Smith came home in 30 in a 66 and Watson signed for a 69 to finish a shot ahead of Marc Leishman and two clear of Dustin Johnson and Tony Finau.