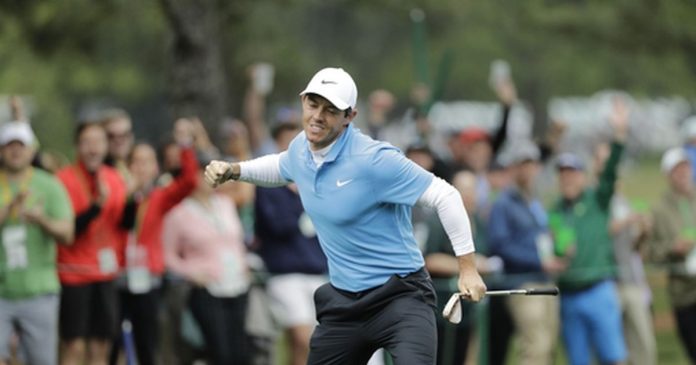 Patrick Reed and his par-5 prowess versus Rory McIlroy and his penchant for clutch shots.

It’s Hazeltine in 2016 all over again, and the Masters can only hope for a similar, back-and-forth, down-to-the-wire finish.

Reed and McIlroy are forever linked to that singles match two years ago. Reed prevailed on the 18th hole in a rare U.S. victory at the Ryder Cup.

Now, it’s about stroke play, and with golf’s first major of 2018 on the line.

”It’s definitely not a two-horse race at this point,” McIlroy cautioned. ”There’s a lot more guys. I told myself today, leaderboards are huge here; it’s hard to miss them. But I said to myself, `Don’t concentrate on them too much. Try not to look at them.’ It’s hard not to.

”I’ll obviously know what Patrick Reed is doing, but apart from that, I’m going to set myself a target, try to get to that and hopefully it’s enough.”

McIlroy should hope he hasn’t used up all his luck . McIlroy shot a 7-under 65 in the third round Saturday to match his lowest score at the Masters, pushing him within three shots of Reed and into the final pairing.

He chipped one in from 23 yards away for an eagle at the par-5 eighth. He saved par at the 13th after knocking his ball into a thick patch of pink azaleas. He watched an errant tee shot at the final hole ricochet back into the fairway, setting up a birdie that could have easily been a bogey.

”I rode my luck a little bit out there” Saturday. McIlroy said. ”Hopefully I don’t have to rely on it too much” Sunday.

This is the fourth straight year that McIlroy arrived at Augusta National looking to complete the career Grand Slam – a feat accomplished by only five of the game’s greatest players.

The last three times, he was simply too far back to make a Sunday run at the green jacket.

This time, it’s within reach, though he’ll have to chase down a guy who’s carded three straight rounds in the 60s.

”I feel like all the pressure is on him,” McIlroy said. ”He’s got that to deal with and sleep on tonight.”

Reed surely will bank on more par-5 dominance. He’s played the course’s longest holes at 13 under this week, better than anyone else in the field.

Reed ran off three straight birdies around the turn and stretched his lead with two eagles on the back nine.

Keeping it won’t be easy, not on this stage. Reed also doesn’t buy into the idea that the pressure is all on him, a notion McIlroy quickly suggested.

”I am leading,” he said. ”At the same time, he’s going for the career Grand Slam.”

Here are some other things to know heading into the final round:

ALSO IN THE MIX

Rickie Fowler and Jon Rahm both matched McIlroy for the best score of the tournament with a 7-under 65.

They’ve still got a lot of work to do.

Fowler is five shots off the lead , while Rahm is another stroke back. Like Reed, both are seeking their first major title.

”Obviously it’s been everyone’s dream to win the Masters,” Fowler said. ”To be able to have that chance to walk up 18 with a chance to win, or maybe you have it closed out and that’s your walk to victory.”

Only eight players are within eight shots of the lead, which is the largest 54-hole deficit that a Masters winner has ever come back from. Jack Burke Jr. did it in 1956.

Justin Thomas and Jordan Spieth were among the favorites coming into the week, but neither made a move on Moving Day.

Both are nine shots back after Thomas shot 70 and Spieth 71 on a soggy day with prime scoring conditions.

”I get to go out for one of my only stress-free rounds that I’ve ever really played at Augusta National,” Spieth said.

OUT OF THE RUNNING

Four-time winner Tiger Woods turned in his best round of the week , but he was merely an afterthought after shooting a 72 that left him 18 shots behind Reed.

Phil Mickelson plodded to a 74 and was a staggering 21 shots behind going to the final day. Only one player, 55-year-old Vijay Singh, has a higher 54-hole score than Mickelson’s 223.

Speaking of Singh, he shot an ugly 79 that put him in the first group of the final round.

Officially, he’s playing by himself, but club champion Jeff Knox will tag along as a non-competing marker.

Knox played Saturday with Paul Casey, who credited his partner with helping him shoot a 69.

”He’s very good,” Casey said. ”That was the best experience I’ve ever had with a marker.”

After periods of heavy rain Saturday, the forecast for the final round is more promising: Partly sunny skies with a slight chance of showers, and afternoon highs in the lower 60s.

McIlroy off to solid start at Experts, keeps Slam in sight