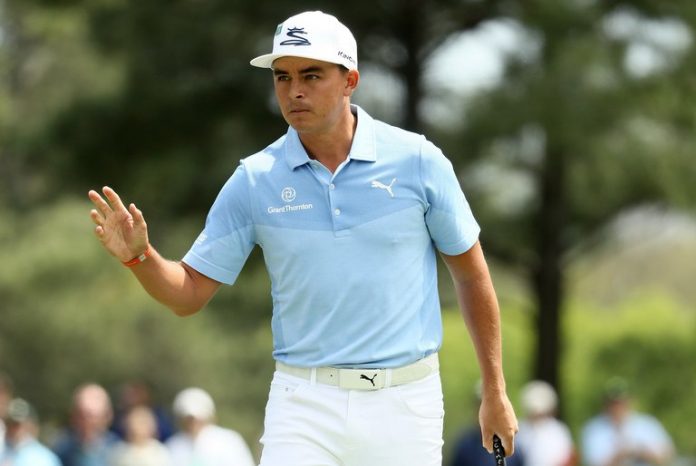 Rickie Fowler, after making a putt for birdie on the eighth green during the second round of the 2018 Masters Tournament. (Photo by Jamie Squire/Getty Images)

AUGUSTA, Ga. – He hasn’t won in more than a year and recent bids to change that have resulted in only more questions about his inability to change it.

Rickie Fowler can’t win for losing, mainly because he can’t win enough for his own tastes – or likely for that of anyone else who follows golf. And every time he comes close, his record of relative underachievement becomes more conspicuous. Onward he pushes, however, intent on joining some of his best friends – Bubba Watson, Jordan Spieth and Justin Thomas – as major champions.

The guy has pluck.

That was evident on a treacherous Friday at Augusta National Golf Club. Despite a series of back-nine misadventures on the greens, Fowler displayed patience amid stiffening breezes to squeeze out an even-par 72 and remain in the hunt in the 82nd Masters Tournament. At 2-under 142, Fowler for the second straight year has given himself a shot at a green jacket.

“We’re in a good spot going into the weekend,” said the California native, who last year held a share of the 36-hole lead but ended up T-11 when he closed with a 76. “Happy where we’re at after two rounds. Definitely looking forward to the weekend, and the putts are definitely due to fall.”

They certainly are. He needed 33 of them on Friday, that included three-putt greens on 13, 15 and 16. The number could have been higher had he not rolled in a 66-foot par save on the par-3 sixth hole. “It was a nice bonus, and kind of kept me moving forward,” he said. “I felt like I had a lot of good looks after that. I was able to make one on eight. Had some good looks on the back nine. And just wasn’t able to make a whole lot.”

Oddly, Fowler led the field in putting here last year. He had 109 total for an average of 27.25 putts per round. Already this year he has 61, reflective of a season-long trend in which he ranks 103rd on the PGA Tour on the greens.

Playing in his eighth Masters, Fowler, 29, came in with high expectations, but he wasn’t high on many radars, perhaps after starting fast in a number of events and then fading on the weekend. Twice he opened with 66s, at the Waste Management Phoenix Open and last week’s Houston Open, yet he didn’t finish in the top 10.

RELATED: Fowler is No. 1 in the world ranking…of ‘Ten Best-Mannered People,’ according to National League of Junior Cotillions

When he arrived for his Monday news conference at Augusta National, Fowler, a past winner of The Players, was greeted by less than a dozen reporters. He had a sense of humor about it, remarking, “I know who my friends are.”

He’d love for his friends – the ones in the tour community – to return the courtesy he has shown them through the years, standing by on the 72nd green to watch them finish off major victories. But that’s more on him to get it done. One of the tour’s more popular players, and known as one of the nicest, Fowler likely would draw a crowd. One of the game’s more talented players, he stands out as a guy who should be rising above the crowd.

Sort of like he did in December at the Hero World Challenge, when he birdied the first seven holes of the final round, fired a closing 61, and won by four strokes.

Perhaps if he weren’t so nice. But that just isn’t him.

“It’s fun to see your friends win,” he said on Monday, leaving unsaid how much fun to see himself win a bit more often. “It’s fun to see them play well. I want to beat my friends when they’re playing well. Like you said, it is a motivation factor in a way. Seeing JT and Jordan and Bubba, seeing Sergio win here last year, it is fun to see. But it also is kind of a kick in the butt to get yourself to kind of keep pushing forward.

“And you want to be in that position and you want your buddies to, whether they decide to be there or not, it’s kind of a nice bonus, a nice touch,” Fowler added. “But it’s fun to have the bragging rights over your friends.”

Not that he would know. But he’s ready to find out. And then see who is friends really are.

Highlights: Bryson DeChambeau has wild Round 3 finish at The 150th...