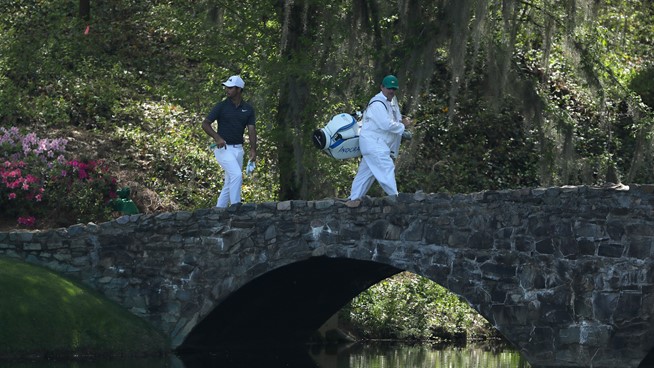 Shubhankar Sharma admits it is a dream come true just to be playing at the Masters Tournament but insists he is not at Augusta National to make up the numbers.

The Indian has claimed two wins this season and three other top-ten finishes – including at the WGC-Mexico Championship – to lead the Race to Dubai Rankings presented by Rolex but it shows how far he has come that those achievements did not see him crack the Top 50 in the world.

That would normally mean you are on the outside looking in at Augusta National but Sharma has been handed a special invitation to make his Major Championship debut this week.

“I always dreamed of playing here but, to be honest, I was very surprised when I got the invitation and I always wanted to get here but just to get here so early is truly, truly a dream come true,” he said.

“If my game is good enough to win here, which I feel it is if I play my best, I will surely be in contention. It’s just like any other golf tournament, you play four good rounds of golf and you end up winning.

“Obviously the pressure is a lot more and it’s a very high stage but personally I don’t feel any burden. I’m actually very happy that I’m getting a lot of attention.

“A lot of people back home are following me and if I can get a good finish this weekend, maybe even win a Green Jacket, it will be great for the game.”

As the world’s second most populous nation, many eyes in India will be on Sharma this week as the golfing community grows in a country of over a billion people.

I always wanted to get here but just to get here so early is truly, truly a dream come true – Shubhankar Sharma

If the 21 year old can become the first Major Championship winner from India then interest would only grow further, and Sharma is eager to help establish the sport.

“I think it would mean a great deal,” he said. “We don’t have a Major winner but we have a top ten by Jeev Milkha Singh in the PGA Championship.

“I think that we do have a lot of great players back home in India. We have a strong presence in Asia on the Asian Tour and we have a good few good players on the European Tour as well.

“I feel like it will do wonders for the game back home. I feel like more and more kids will start playing and every sport needs a hero and we have a few heroes back home, but a Major winner has a different sound to it.

“I feel like if I can inspire kids back home in any way, it will definitely be a great thing for me and I’ll be really happy if I can do that.

Ashton Wunder’s journey to Callaway Golf’s World of Wunder | Beyond...