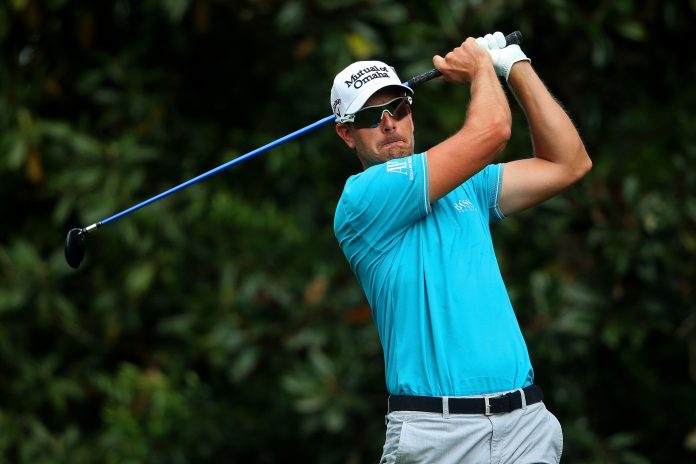 Henrik Stenson grabbed a share of the clubhouse lead during a day one of tough scoring at the Masters Tournament.

The Swede fired a 69 to sit at three under alongside American pair Charley Hoffman and Patrick Reed and Canadian Adam Hadwin, with Tony Finau a shot ahead with five holes to play at Augusta National Golf Club.

The big-hitting American had dislocated his ankle playing the par three contest on Wednesday, putting it back into place, and was only told by doctors he was fit to play after a scan on Friday morning.

But he showed no ill effects as he recovered from a bogey on the first with birdies on the second, fourth, eighth, ninth and 13th.

Bernd Wiesberger, Zach Johnson and Marc Leishman were in the clubhouse at two under.

Stenson holed a 27-footer for birdie on the fourth and an approach to nine feet on the seventh had him within one of the lead.

A 30-footer on the 11th put him into a share and while Leishman birdied the 13th to edge back ahead, Stenson did the same after getting on the green in two to pick up two shots on Amen Corner.

A Leishman double-bogey after finding water on the 15th dropped him back but Stenson did not have the solo lead for long as he dropped a shot on the 14th.

That put him in a tie with Hadwin, who made birdies on the ninth, tenth and 12th, and Hoffman who had gains on the second, eighth, 12th and 13th to go with a dropped shot on the ninth.

Hoffman hit the front on his own with a third consecutive birdie on the 14th but Stenson took advantage ahead on the par five 15th to join top spot.

Hadwin had bogeyed the 14th but responded with back-to-back birdies on the 15th and 16th to once again make it a three-way tie.

Stenson then went over the back of the green on the last and failed to get up and down, surrendering a closing bogey.

In the group behind him, Hadwin and Hoffman also bogeyed the 18th, with a par for third member Reed allowing him to also finish at three under.

The 27 year old was level par after 11 holes with two birdies and two bogeys but then made a hat-trick of gains from the 13th.

Wiesberger holed a beautiful 16-foot left-to-righter on the third but bogeys on the fifth and eighth left him over par at the turn.

A stunner to three feet on the tenth brought a birdie and an approach to four feet after laying up on the 13th had him under par before a long putt on the 15th saw him set the early clubhouse target.

Leishman finished with three pars to join him and a birdie on the last helped 2007 champion Johnson make an excellent start.

Li Haotong and Jordan Spieth were also two under playing the back nine, a shot ahead of 2000 champion Vijay Singh and Japan’s Satoshi Kodaira.

Francesco Molinari and Tommy Fleetwood were at level par, a shot ahead of returning four-time champion Tiger Woods.

Defending champion Sergio Garcia signed for an 81 after taking a 13 at the 15th.