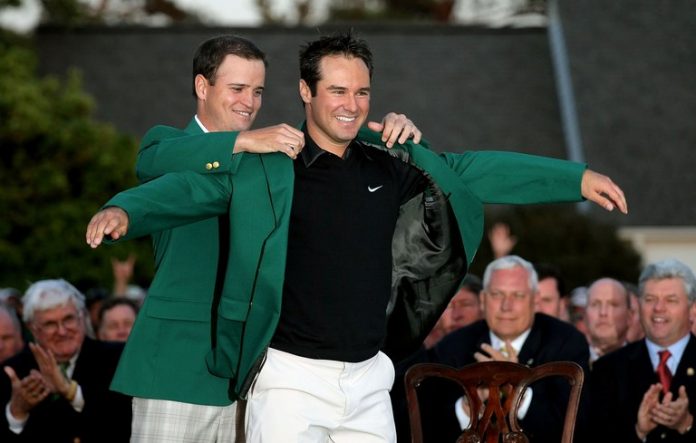 The fact that this article has been written, and will be published on the Wednesday of Masters week 2018, guarantees the following outcome:

Ted Potter Jr. will win the green jacket in a Tuesday finish with double bogey on the fifth playoff hole against Ryan Moore and Charley Hoffman and Yuta Ikeda and Ross Fisher and Marc Leishman. The Alabama football fan who poisoned the Toomer’s Corner oak on Auburn’s campus will hit every azalea at Augusta National, Rae’s Creek will flood due to leaking sewer mains, the entire media center will be hacked by the Russians and rebellious squirrels will kidnap new chairman Fred Ridley.

It is written. And for invoking such horrors with this ill-conceived jinx of an article, I, the stupid author, do humbly apologize in advance.

On paper—I repeat, ON PAPER—this is the best Masters ever. Right? Right. I am genuinely overwhelmed with excitement in a way I haven’t been in a very long time, and I’m an excitable boy. The sheer number of interesting—nay, fascinating!—storylines, and great players on great form with great chances to win … well, it’s rendered me a shaking mess. I don’t think it’s possible to overdose on golf anticipation, but if it is, I’m reeling and halfway to collapse. For a brief moment during the Houston Open, I thought I’d be fine, and then Ian Poulter did the thing you see below, and suddenly my vision became saturated with kaleidoscopic light, giving way to the strangest visions:

It’s not that Poulter making the Masters field at the stroke of midnight with a Poulteresque flourish is the best story of the tournament, or even anywhere close. It’s just that we were already stuffed with savory narratives, and then a butler arrived with a fluted porcelain dish filled with the world’s richest creme brulee, and now our stomachs are in revolt. But in a good way. Or something.

The point I’m trying to make is that this Masters is so insanely tantalizing—ON PAPER—that it makes sense for me to rave incoherently about food and hallucinogens. Rational reactions are no longer sufficient. We must lose our cool. Before this goes any further, let’s get concrete and call these narratives by their name.

First up, leading off, overshadowing all and sundry, is Mr. Tiger Woods. Perhaps you’ve heard of him … incessantly. I wrote an article two weeks ago that was similar to this one in tone, arguing that we had just seen the greatest opening weekend in March Madness history. I had lots of supporting arguments, but one really big one—a 16-seed beat a 1-seed for the first time ever. EVER. I wrote a lot of words after that, but I really didn’t need to, because that simple fact proved my point. And in the same vein, Tiger Woods having a legitimate shot to win the Masters for the first time since 2013 is the show-stealing beauty queen of this parade. Everything else is kindly volunteer firemen throwing candy to children from the back of a wagon—Tiger is the main attraction, with the tiara and the regal wave.

It’s absolutely wild that it’s happening for him after so much time and so many setbacks, and even by reaching this stage he’s forced me and so many others to platefuls of crow. If he’s anywhere close to the leaderboard on Sunday, the CBS telecast will break every ratings record in the books.

Next up? Jordan Spieth, baby. In Austin, at the WGC-Dell Match Play, he joked about how nice it have Tiger back, since he stole the majority of the spotlight away and made things simpler for everyone else. Well, that’s true, but we are talking about you, Jordan. You showed a melancholy face after losing to Patrick Reed two weeks ago, and you doubted every part of your game (but especially the putting part), and maybe you were poised to fly under the radar at Augusta. Then Houston happened. You were very nearly yourself in Houston, sinking long putts, scaring the leaders on Sunday and generally carrying on with a bit of the old neurotic swagger. You’re so back, and you’re so good, and you’re such a threat. The media may still worship at the altar of Tiger, but to quote Illyrio Mopatis from “Game of Thrones”, ahem: “The people sing secret toasts to your health … they cry out for their true king!”

After those two titans, you can’t help but stare agog and agape at the sheer number of exciting, elite players who are in top form. Shall we run down the list?

•Justin Thomas is playing great golf.. He won a tournament this year. He might be No. 1 soon. Nobody is really talking about him.

• Rory McIlroy is playing great golf. He won a tournament this year. He has a chance to complete the career slam. Nobody is really talking about him.

• Dustin Johnson is playing great golf. He won a tournament this year. He probably won’t fall down the stairs again. Nobody is really talking about him.

• Jason Day is playing great golf. He won a tournament this year. He’s come agonizingly close at Augusta before. Nobody is really talking about him.

• Bubba Watson is playing great golf. He’s won two tournaments this year. Anytime he’s playing extremely good golf at this point in the season, he also wins the Masters. Nobody is really talking about him.

• Jon Rahm is playing great golf. He’s won a tournament this year. He’s ranked third in the world, ahead of Spieth. Nobody is really talking about him.

• Phil effing Mickelson is playing great golf. He won a WGC tournament this year. He played a practice round with Tiger. Still, relatively, nobody is talking about him!

Now, sure—I’m exaggerating a little bit. Some people are talking about these guys. But it’s also true that they’re being starved of oxygen by the predominance of Tiger (and to a lesser extent Spieth), and also by the fact that this tournament has laden us with an embarrassment of riches. We are all like the spoiled child on Christmas morning, ripping through his gifts without pausing to appreciate a single one—TIGER! SPIETH! THOMAS! BUBBA! MORE, MORE, GIVE ME MORE! ALWAYS MORE!—while through the frosted window, out in the cold, a poor urchin boy with smudged cheeks watches in envy and sadness, because that urchin boy is from the year 2008 and the only gift his parents could afford to buy him was a lousy Trevor Immelman.

Any one of them would make a thrilling addition to the leader board, and none of them would be surprising. Which is an important point—every beautiful scenario you want to imagine is also realistic. That never happens! That is a gift from the gods!

Thursday morning, actual golf will be played, and nobody knows what will happen. But there are times when you have to appreciate pure potential, and the 2018 Masters, ON PAPER, is a staggering hype machine that we should all acknowledge and be grateful for from now until … tomorrow. It’s going to be incredible. It’s an ironclad guarantee.

Golfing is Hard | No . ten at Riviera Country Club...