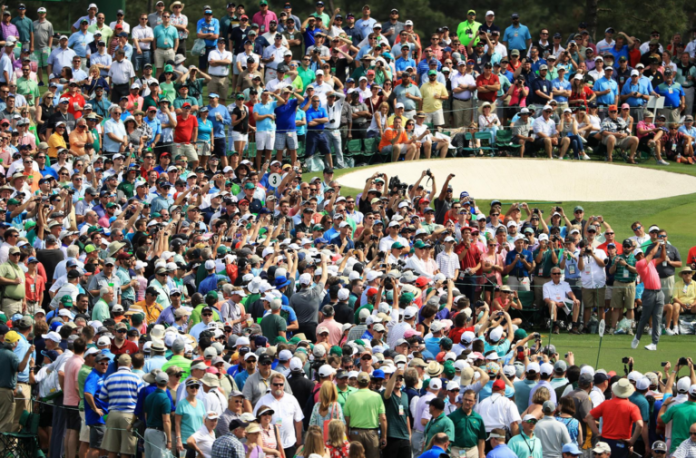 Welcome to another edition of The Grind, where we want to thank all of our readers for reaching out during our two-week absence. And by “all of our readers,” I mean the one guy on Twitter who noticed I wasn’t around. Seriously, is this thing on??? Anyway, like Sergio Garcia, I’m happy to report that I’m a dad to a little girl now — and our wives apparently have the same taste in baby hats.

I wanted to recreate the Garcias’ lovely photo as a gag, but my wife wasn’t having it. She also wasn’t having any golf-related names like “Azalea,” which Sergio named his daughter after the 13th hole at Augusta National. Although, Julia Belle sounds kinda like “Golden Bell,” which is the name of the par-3 12th. . . Anyway, I’m back to talk some golf ahead of one of the most anticipated weeks in recent history. And I look forward to swapping dad stories with Sergio the next time we cross paths.

Ian Poulter: Say what you will about the guy, but he needed to do something he’s never done in his career (win a stroke-play event in the U.S.) to get into the Masters — and he did it. That is clutch. To pull it off after shooting an opening 73 and the week after he was mistakenly told he was already in the Masters — how does he keep getting fed bad info, by the way?! — made it an even better story. And the chest-thumping reaction was fantastic.

Beau Hossler: It was a brutal ending for the rising star, who skulled a bunker shot into the water in his first PGA Tour playoff. But I’m still a big Beauliever, because he just turned 23. Oh yeah, and he led the freaking U.S. Open when he was still a junior in high school. Beau will be back again. And again. And again. . .

Pernilla Lindberg: This is certainly the year of the playoff, and it was this 31-year-old Swede who prevailed in one of the most epic extra-hole sessions ever. The eight-hole, two-day marathon involved floodlights and ended when Lindberg drained a 30-footer for birdie to beat Winbee Park. After claiming her first win in 250 starts as a pro — and making it major, no less — Pernilla took a well-deserved dip in Poppie’s Pond and got a big, wet kiss from her caddie/fiance Daniel Taylor.

Congrats, Pernilla. Plus, I dig the Trader Joe’s sponsorship, because I’m a big fan of the grocery chain. I hope you celebrated with a tub of those chocolate cat cookies. Those things are tasty. And surprisingly low in fat.

Brooks Koepka’s season: After a year in which he was the biggest breakout star not named Justin Thomas, sadly, Koepka has been sidelined by a bad wrist that will keep him out of the Masters. Get better, Brooks. We need to recreate our “hole-in-one” magic at the Players next month. But while Koepka’s season has been disappointing, his year seems to be going just fine otherwise.

We see what you did there, Brooks. Well played.

Jim Nantz’s “meme” pronunciation: Let’s get something straight here: Jim Nantz is the man. And that’s not just because he told me he’s a fan of The Grind at last year’s Masters (Although, it helps). Nantz has the world’s best job, one of the coolest houses/backyards, and he speaks in poetry. Usually. However, he made a somewhat embarrassing gaffe during the Final Four. . .

No one is perfect. Not even Jim Nantz. But he’s close. If you want to get pumped up even more for this week’s tournament, check out this awesome collection of his Masters monologues that was put together by our Chris Powers. We can’t wait to hear what he comes up with this weekend!

Yes, my curb was mangled by a plow. And yes, that tree that fell during one of the last big storms is still in my backyard. That thing might be there until my daughter is playing on the LPGA Tour.

Just more motivation for Tiger to complete this mythical comeback.

RANDOM PROP BETS OF THE WEEK

—The Masters winner will thump his chest like Ian Poulter: 60-to-1 odds (Poulter’s odds to win)

—My daughter will be wearing red on Sunday if Uncle Tiger is in the mix: LOCK

PHOTO(S) OF THE WEEK

Oh, and how about that chip-in for eagle?! Can this tournament start already?!

VIRAL VIDEO(S) OF THE WEEK

This video by impressionist Conor Moore is bloody brilliant:

You know it’s good when even Sergio Garcia approves of you ribbing him.

And speaking of impressions, how about this kid’s John Daly-esque swing:

THIS WEEK IN TOUR PRO-WAGS PUBLIC DISPLAYS OF AFFECTION

Maria Ochoa announced she and husband Camilo Villegas have a girl on the way:

Talk about putting the reveal in a baby reveal. Congrats to arguably golf’s fittest couple. And Sergio managed to mention his wife on his Masters Champions Dinner menu:

I’m looking forward to trying that dessert when our families get together! My place or your place(s), Sergio? Just let me know.

QUOTE OF THE WEEK

The new Masters Golf Shop looks nicer than the White House and features 385 mannequins — including a dog mannequin — to show off items for sale. And I’m not surprised in the least after the incredible media center that opened there last year. . . . Tiger Woods and Phil Mickelson played a Masters practice round together on Tuesday. The only way this season could get better is if these two legends team up for the Zurich Classic later this month. . . . And finally, once again, I’m a dad.

How did this happen?! Becoming a dad, that is, not developing a double/triple chin. I know how that happened.

How much did Tiger and Phil play for?

What will Sergio Garcia name his first son?

How does Jim Nantz pronounce GIF?