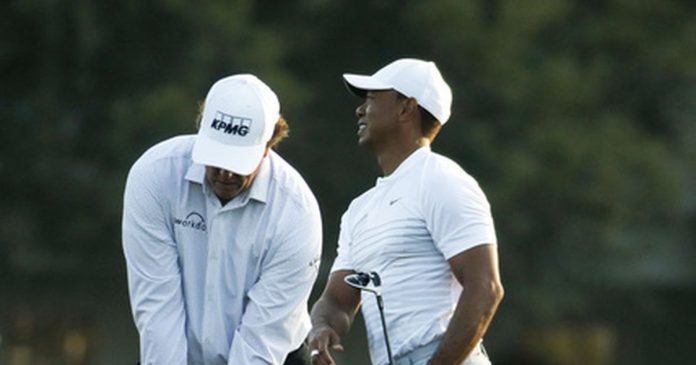 AUGUSTA, Ga. (AP) The power off the tee and the sharpness with his short game made him look like the Tiger Woods of old. The smile on his face and the company he kept Tuesday at the Masters – a practice round with Phil Mickelson – suggested someone entirely different.

Woods and Mickelson had not played together at Augusta National since 2009, and even then it wasn’t by choice. They were paired in the final round, and while neither won the green jacket, Lefty shot 67 and got him by one shot.

This time they were partners, and it wasn’t a fair fight against Fred Couples and Thomas Pieters.

Never mind that Mickelson hit his opening tee shot at No. 10 behind a magnolia tree. Unlike that failed foursomes match they played at Oakland Hills in the 2004 Ryder Cup, Mickelson had to play the next shot, too.

The two loudest roars that shattered the morning calm came from Woods making eagle on the two par 5s at No. 13 and No. 15.

”I made a few birdies in there,” Mickelson said. ”We had a five-hole stretch. We were 7 under. That was some fun play.”

This was only a snapshot, and it received far more attention because of the stage at Augusta National and the two leading characters. Woods and Mickelson have been longtime rivals, rarely friends and hardly ever partners.

But it’s not just with Mickelson.

Woods has become a mentor to Justin Thomas, Jason Day and Rickie Fowler among other youngsters. Long respected by his peers as the greatest player of his generation, he now has formed relationships with them. Padraig Harrington hardly recognized Woods at Torrey Pines earlier this year when he saw him walk onto the range, exchange a few high-fives and stop to chat.

Woods turned 42 at the end of last year. He has been away from golf for much of the last few years because of his four back surgeries. The Masters will be the first major he plays since the PGA Championship in August 2015.

Perhaps, as Harrington suggested, he simply has mellowed.

”I think they just missed my sharp needle,” Woods said. ”This is just like a fraternity. When somebody gets hurt and someone gets sick, we bond. We come and try to support them as best we possibly can. Because we all know what it takes to be at this elite level.”

Regardless, he has come a long way in a short amount of time.

Only last year, Woods said he had trouble just sitting through the dinner at the Masters Club of past champions because of pain from his lower back shooting down his legs. That hurt about as much as being at Augusta National without his clubs for the second straight year, not knowing when or even if he would return.

The low point came last summer when he was arrested on a DUI charge in Florida after police found him asleep behind the wheel, his car parked awkwardly on the side of the road with the engine still running. Woods was found to have a mix of prescription pills to help with pain and sleep. He sought treatment, and then perhaps the best therapy was being among players as an assistant captain at the Presidents Cup.

”I don’t know the reasoning, but I think your assertion that he has a lot of great relationship with a lot of players, I think that’s accurate,” Mickelson said. ”His relationships with the guys on the team are extremely close.”

That includes Mickelson, of course.

The last practice round they played together, as best as Mickelson can recall, was 20 years ago at the Nissan Open when it was played at the TPC Valencia. Mickelson tricked him into hitting the wrong club late in their match and took $500 off him. If that wasn’t enough, he photocopied the five $100 bills, added smiley faces and wrote, ”Just wanted you to know Benji and his friends are very happy in their new home.” And that was their last practice round at a tournament – until Tuesday.

Woods and Mickelson were chatting off the 10th tee, and up to the 11th tee, and throughout their nine holes of practice. Mickelson tried a variety of flop shots around the 15th green with his 64-degree wedge, and Woods laughed when Lefty holed one of the more difficult shots.

Miserable a year ago, Woods was in a happy place.

And it caused quite a buzz, not only among the thousands who tagged along that made this a practice round unlike any other at the Masters, but the other players.

”I walked past Tiger on the range and I said, `I never thought I would see the day – Tiger and Phil playing a practice round at Augusta,”’ Rory McIlroy said. ”So we had a bit of a laugh about that. I think both Tiger and Phil have started to take the team stuff a lot more seriously as they have progressed in their careers, and they have obviously become very close. … And it’s great to see two of the top stars of our game for a long time.”

Still to be determined is how that translates to competition that counts. Mickelson already has won this year. Woods is getting close. And those youngsters who look up to Woods are among the best in the world.

”I really hope I’m playing my best golf,” Woods said. ”This is a tournament where experience does help a lot. I’ve won here not playing my absolute best, but there’s got to be a certain part of my game that’s on.”

These types of Hill best bets: Rory McIlroy and a first-time...