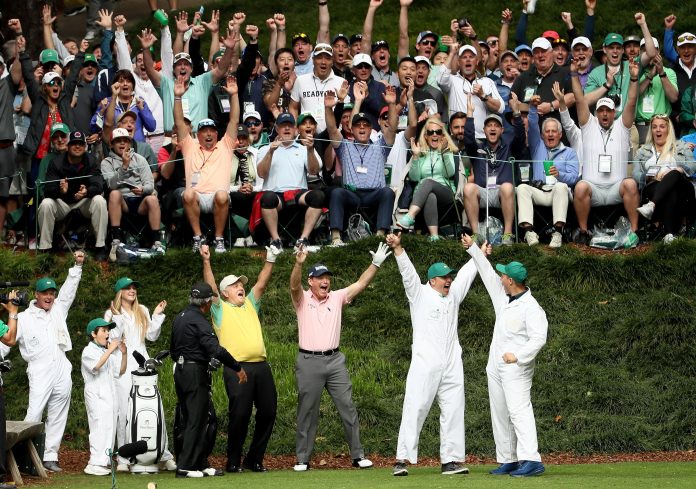 The wait is over. The 82nd edition of the Masters got under way on Thursday, with fans across the world spoiled for choice when it came to storylines to follow.

Jack Nicklaus and Gary Player played the honorary tee shots this morning in front of an adoring public. It’s the second year that the pair, who have nine Green Jackets between them, have begun proceedings without Arnold Palmer.

It was the moment the sporting world had been waiting for. Tiger Woods returned to the Masters for the first time since 2015 this morning and opened with a 73, the second Masters running he’s posted that score on Thursday.

Watch @TigerWoods birdie No. 3 during the first round of #themasters. pic.twitter.com/vKBCvRvsAt

Bubba Watson isn’t one to go about his business quietly. The American was sporting some rather loud green shoes in honour of this week’s event.

When you catch Jason Day’s golf ball in your cup! 😂#TheMasters pic.twitter.com/28ztuKNRD3

The 2015 Masters Champion is off to a flying start. Jordan Spieth, who also led after 18 holes three years ago, is two clear in Augusta. He made five birdies in a row from the 13th to the 17th to steal the show. Once again in this tournament, he’s the man to catch.

When Tony Finau twisted his ankle celebrating a hole-in-one in yesterday’s Par 3 Contest, you could have understood if he’d reluctantly pulled out. That clearly wasn’t on his mind, though, as fired a 68 in the opening round. Not bad on your Masters debut.

Another man making his first Masters appearance today was Li Haotong. The man from China signed for a 69 and might be interested to know that the last two Masters winners both won the Omega Dubai Desert Classic. The winner of this year’s Desert Classic? You guessed it…

Take your hat off to 55 year old Vijay Singh. The 2000 Masters Champion played some excellent golf to post a one under round of 71. He’s ranked World Number 518, but showed a bit of old class to get in the mix.

Unfortunately for Sergio Garcia, he recorded an unwanted piece of Masters history. The Spaniard signed for a 13 on the 530-yard par five 15th, after hitting five balls into the water.

Tony Finau – “To be in this position I’m at now, after waking up this morning, is nothing short of a miracle if you ask me. I could barely put any pressure on it,  I could barely walk, but obviously, after the MRI we had, you know, there was no real damage. So at that point, at about 8:00 this morning, I knew I was going to play.”

Sergio Garcia – “[on his 13 on the 15th hole] It’s the first time in my career where I’ve made a 13 without missing a shot. Simple as that. I felt like I hit a lot of good shots and unfortunately the ball just didn’t want to stop. I don’t know, you know, it’s one of those things.”

Jack Nicklaus – “[on his grandson’s hole-in-one in the Par 3 Contest] “Yesterday, I said I didn’t want to be disrespectful because six green jackets is pretty good, but that’s about yourself. When something happens with your children or your grandchildren, that’s far more special to you. And so yesterday I said was the greatest day I’ve had at Augusta National, and it was just absolutely fantastic. I loved it.

Tiger Woods – “I got myself back in this tournament, and I could have easily let it slip away.  And I fought hard to get it back in there. There’s a lot of holes to be played.”

Exactly where DJ’s game stands when he looks to defend the...