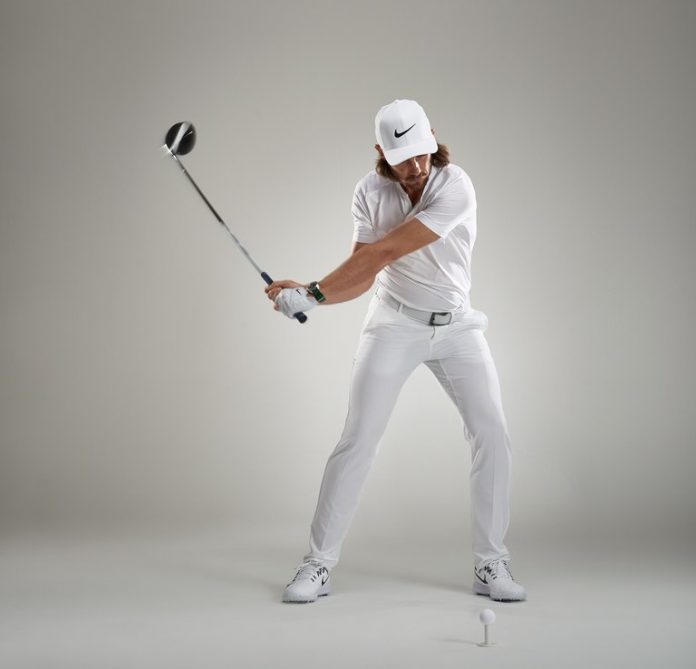 Golf is always a balancing act. You know your strengths, so to get better you have to work on all the other things. The problem with that is, if you start ignoring what you do best, then that stuff starts to suffer. You really have to pay attention to your whole game—that’s what helped me improve in 2017. I won twice on the European Tour and took the Race to Dubai, which is a season-long competition similar to the FedEx Cup. I’ve already won this year, the Abu Dhabi HSBC Championship, and I was ranked 12th in the world in February.

What got things going for me is better accuracy in all facets of the game. And it started with alignment. Hard to believe, but I was playing the game thinking my targets were farther right than they really were. If only I had looked up. No joke, a simple adjustment in alignment led to better ball control. From there, everything started to click—I was putting it in the fairway off the tee (or close enough), I was hitting a lot of greens, my pitches were getting closer to the hole, even my putts started going in.

That brings me to my first piece of advice to becoming more accurate with all your clubs. Do everything you can at setup to make that happen. Don’t take ball position, body-and-club alignment, putting line, any of that for granted. Get that right, and you’ll immediately start controlling the ball better. That’s your mission: ball control. Let me take you through the bag on how I do it. — With Ron Kaspriske

Who is Tommy Fleetwood?
If you don’t know him by name, Tommy’s face—or specifically, his hair—probably look familiar. His oft-unshaven whiskers and long, scruffy hairstyle—”It’s not a mullet,” he says—make him stand out against golf’s conservative majority. But don’t mistake that for a lack of drive.

“My goal is to keep the momentum going, make the Ryder Cup, and the ultimate goal is to win majors and be world No. 1,” says the 27-year-old Englishman.

Before he became the top player on the European Tour, Fleetwood wasn’t as grandiose with his golf goals. But then his control of the ball really improved. He got longer and straighter off the tee (299-yard average, 70.4 fairways-hit percentage in 2017), hit more greens in regulation (76.8 percent, first on tour), and his putting improved (69.72 scoring average, third on tour). He credits some of the leap to swing coach Alan Thompson. The two have worked on and off since Fleetwood was a junior golfer.

His successes have come despite big events off the course, too. Fleetwood became a dad for the first time last September, to son Franklin, and got married in November to Clare Craig.

Fleetwood says he’ll now play more events on the PGA Tour, including the Arnold Palmer Invitational in March and the Masters in April.

“I’m traveling a lot with my wife and baby,” Fleetwood says.

“Franklin has more frequent-flier miles than any six-month-old in the world.”

“YOU CAN’T CONTROL THE CLUBFACE IF YOUR BODY DRIFTS AHEAD OF THE BALL’S POSITION ON THE TEE. STAY BACK.”

OFF THE TEE
I have one idiosyncrasy that helps my driving accuracy. I grip down on the club. This makes it easier to control the clubface. I also play a driver that’s 45 inches, a little shorter than standard. Again, shorter equals straighter. However, those two things also hurt distance. I can still get it out there long enough, but you might want to keep that in mind before gripping down or going to a shorter shaft.

Another way you can find the fairway more often is to shallow your approach into the ball. If you watch my swing on video, the clubface is square with my target about a foot before and after impact—like it’s tracing the ground.

I see a lot of amateurs coming into the ball way too steep. They can’t square the clubface consistently, and they put too much spin on the ball. Spin will accentuate any curve on the shot. Slices slice more.

“DON’T TRY TO HIT THE BALL WITH YOUR HANDS. JUST TURN AND LET THE CLUB TAKE IT OFF THE TURF.”

INTO THE GREEN
There are a lot of guys out here who swing down and through impact using forearm rotation to close the clubface and trap the ball. Not me. I swing down from the inside just like them, but I square the club at impact by keeping my body turning. There’s very little forearm rotation or flip, where the right hand rolls under the left. I see amateurs do that, and it’s very hard to control ball flight if you’re too active with your hands.

Instead, keep your hands and arms passive, letting the club follow your body through impact. That means you gotta keep turning. I want my body rotation to stay ahead of my hands and club, as if they are being dragged. Do that, and you can swing down from the inside and square the clubface without forearm rotation. Even after I hit it, my forearms haven’t turned much. This type of swing relies a lot less on timing. Even if you’re off, your misses won’t be as bad.

A drill to get a feel for this is to take a 7-iron and hit shots that go only 100 yards. Do this simply by propelling the club with body rotation. Your arms stay long throughout the swing—like a windmill—but act like they’re dead weight. This will help you feel how to square the club without trying to do it with your hands. Big-muscle swings are a lot easier to control.

Something that will help shallow your approach and take spin off the ball is to focus on your left shoulder. It starts by moving toward the target in the downswing, but there’s a point where it shouldn’t go any farther forward, or you’ll get out in front of the ball and chop down on it. Instead, you want your left shoulder to move up and away from the target about halfway down. You can check this by putting a club or alignment stick on the ground perpendicular to your stance and off the heel of your front foot. It represents ball position. When you swing down, don’t let your left shoulder pass that line. Instead, move it up and away from the target. That will shallow your swing, so you can keep the club square through the hitting area and hit up on the ball more.

“IF YOU’RE SHUT GOING BACK, YOU’LL STRUGGLE WITH DISTANCE AND DIRECTION. KEEP THE FACE SQUARE.”

AROUND THE GREEN
I’ve been spending a lot of time lately on those 30-to-50-yard shots—distances too far out to chip it. You might have this part of your game buttoned up, but if you don’t, I’m going to guess that it’s because your clubface is shut through impact. Sometimes that happens to me. I take it back inside with the face shut, then swing out to the right. Wedges aren’t designed to be used this way—not if you want to control the ball. You can hit it solid with a shut clubface, but cheers if you can hit it routinely where you want.

Like controlling a full-iron shot, make a swing where your hands really aren’t all that involved. They’re holding onto the club, but resist the urge to flick at the ball. Here’s a drill to get the clubface set in the backswing, so all you have to do is rotate your body toward the target to hit a good shot. Swing the club about halfway back and then stop. Now take a look at the clubface. If the club feels out in front of your body and the toe is up, you’re in good shape. If it’s a little behind you and the toe is pointing away from you, you’re in trouble.

Remember, the club is designed to glide through the grass, not dig into it—at least not if you’re trying to control where (and how far) the ball goes. So keep the face either square or a hair open.

“NEVER RUSH THROUGH THE STROKE. NERVOUS OR NOT, TAKE YOUR TIME, AND THE RESULT IS ALMOST ALWAYS BETTER.”

ON SHORT GRASS
Good putting starts with understanding the difference between a stroke and a hit. You want to make a stroke and let the energy of that back-and-through motion carry the ball to the hole. If the stroke is short or rushed, the impulse becomes to put extra effort into the strike—a hit—and that rarely produces a putt that rolls on a good line or with the right speed. You can’t control the ball as well.

To avoid the hit impulse, pay attention to your backstroke. I want that part of the swing to feel long and unhurried. A great drill—one you can use when you play—is to pause at the end of your backswing before moving the putterhead toward the ball. This prompts you to accelerate smoothly. There’s no panicked thought to force it to the cup with extra energy—that’s the point here.

You can roll the ball a long way with a stroke that has the force of a five-yard chip. Good rhythm and less effort are how you control the putterface and, in turn, the ball.

Best part of slowing down? This stroke helps your confidence. The ball starts going in, because you don’t let the importance of any given putt force you into doing something differently. That should be your mission with any club if accuracy is your goal: Stay smooth.

Keegan Bradley leads by two in Sanderson Farms after 36 openings...

These types of Hill is ‘hard with regard to being hard’...

Ways to speed up golf…