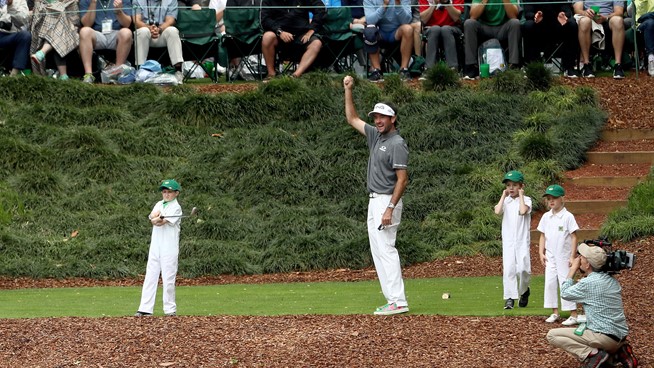 There’s just one more sleep before the Masters gets under way, and it was another busy day at Augusta National Golf Club.

Each day this week, europeantour.com will recap the best of the day’s action, from online to down on the ground. As a tribute to one of the finest Masters traditions going, today’s piece looks back on the best of the annual Wednesday Par 3 Contest.

How about this on your #TheMasters debut?!

It’s in the genes!

Who else wants to know what Jon Rahm and Sir Nick Faldo were discussing here?

Those boiler suits come in all sizes, as Kevin Chappell’s son, Wyatt, showed.

Li Haotong spotted the cameras out on course. True to character, he couldn’t resist a smile.

Ross Fisher celebrates with one of the many youngsters out on the course.

Nicole, Danny Willett’s wife, joined her husband for the contest, accompanied by their son, Zachariah.

Bubba Watson gets the crowd going with his young contingent of caddies.

Rory McIlroy had his wife, Erica, on the bag.

The patrons always come out in force to watch the Golden Bear.

What must be done to turn pro? + Advice pertaining to...

Bernard Finchem to be inducted into Corridor of Fame | Golf...